Questions in Egyptology No. 1 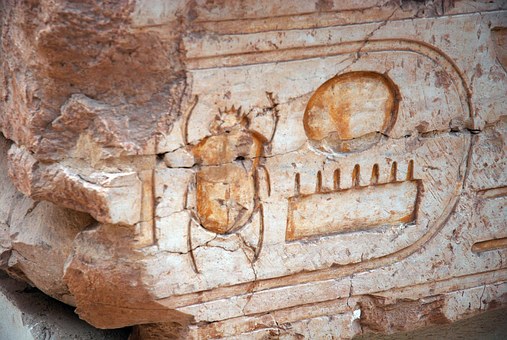 The conventional view of the cartouche in Egyptology was first identified in royal architecture by Flinders Petrie in the late 19th and early 20th centuries. Although his chronologies and his views on race have not stood the test of time, Petrie was right in almost every respect when it came to the architectural survey and analysis of Egyptian monuments says David Ian Lightbody, in his article, The Encircling Protection of Horus, Current Research in Egyptology, 2011.

In Egyptology, the cartouche is considered to be a form of protective symbolism that was represented graphically, and as a partially abstracted concept, by the shen ring, or shenu. It was depicted as twin oval loops of rope, tied at the bottom. These protective symbols encircle the hieroglyphs of the pharaoh’s name

The cartouche is not circular. Circular symbols include the royal uraeus, represented in the image of a snake and the vulture goddess Nekhbet.

Scenes incorporating images of Shen rings and cartouches were often depicted on the architectural elements of tombs and temples, particularly at entrances and on thresholds, such as under architraves, down door jambs or along the tops of enclosure walls. They are said to protect the royal building entrances and perimeters.

The earliest known shen ring image belongs to King Den‘s tomb and dates to the Second Dynasty. It appears on a tag from the royal tombs at Abydos, found by Petrie (Petrie 1901; Pl VII Wilkinson 2001, 207).  The symbol for gold is also on this tag and is considered significant in this context. The king, particularly close to Naqada or Nubt, the golden city, was always associated with gold (Wilkinson 2001, 207). The tag was part of the protection system for valuable goods, control of the treasury, and more generally, control and redistribution of food surplus that were the fundamental functions of the kingship and the basis for his power. This tag could have labelled an item of the king’s gold in the royal tomb.

The critical questions are were these images symbols of something or were they part of a functional magical system of royal protection. Was it protection in life or protection in death, and can a tied loop be considered a circle? I know it’s picky, but I’m pretty sure they are not the same.

If the loop is functioning as a protective magic circle, it provides a protective boundary by enclosing positive and beneficent energies within its confines. In otherwords, it protects what is inside the circle not what is outside. Or, is working like a charm or amulet? If so it may have been thought to offer protection to a given space, in much the same way as a horseshoe charm operates over a doorway. Was the king’s name really a lucky charm? It seems undignified and unlikely.

The idea of forming a protective circle suggests there are things in the world the protected something in the circle needs to be protected from. In Egyptology, there is a commonly held belief that the ancient Egyptians thought that chaos was all around them and that it was in danger of crashing into the world at any time and subsuming everything within it. This view makes the ancient Egyptians seem a bit like nervous wrecks, they sound like people who thought they had no control over the world they lived in which seems at odds with their culture which was highly organised and efficient.  In the cases mentioned by Lightbody, the protective encirclement is around the name of the king, not the tomb and certainly not the land of Egypt.

Now we come to the loop which is made from two pieces of rope. Why two pieces? Why was a single piece of rope not enough? The ropes are never joined wholly; why was that? The ancient Egyptians were perfectly capable of representing a continuous line, but they chose not to. What does this tell us about the way they envisioned the world? Do the two ropes represent duality? If so how?

The Egyptian magician spends a large part of his time tying knots according to Bruce Trigger et. al. A magic knot is a point of convergence of the forces which unite the divine and the human worlds he and his colleagues say in The American Discovery of Ancient Egypt, (Nancy Thomas, Gerry D. Scott, Bruce G. Trigger, Los Angeles County Museum of Art, 1995.)  How does the cartouche or the shen ring unite the human and divine worlds?

We see the knot tying image in the sema tawy image, a motif that shows the gods Horus and Set pulling on opposing ropes with the throne of Egypt in the centre. (in the image below it is two versions of the god of the inundation, Hapi.) The image is said to represent unity and shows the king’s name in a cartouche joined to the heart and lungs of a bull. The symbolism of the heart, lungs and trachea illustrate the complementary relationship between the organs, the lungs must work together to preserve the heart. It is an image of the two lands united by the king. 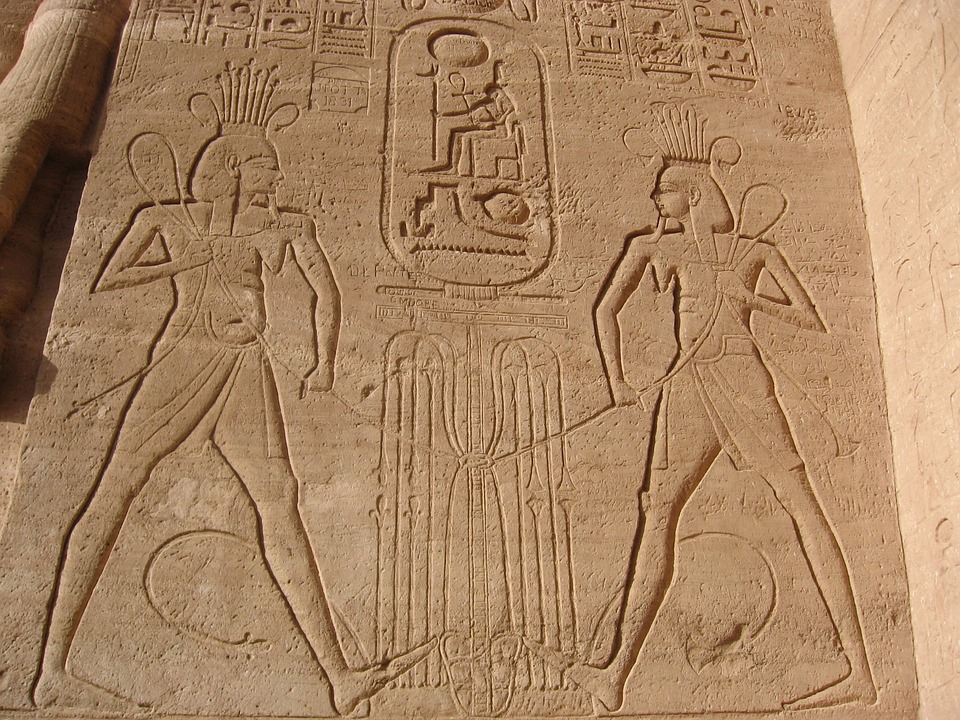 The image shows the king’s name is set within a cartouche.

The shen ring quite a different object, but it is tied in the same way as the cartouche. The Shen ring is usually seen carried by the vulture goddess Nekhbet and the god of eternity Heh. The Shen ring may be a protective charm when held over the king by Nekhbet.  The vulture goddess may be constantly on guard to catch the king’s soul as soon as he shuffles off his mortal coil. In the hands of Heh, it represents millions of years or an eternity of cycles.

We believe the cartouche holds the king’s name together in the same way that bandages held his dead body together. The ancient Egyptian were obsessed with thwarting the process of decay. They understood that bodies if left unbound disintegrated into a pile of bones.  The cartouche was designed to hold the king’s name together so that it would remain intact, could be read and said, and in this way, it preserved his Ka spirit or his worldly persona. The cartouche protects the king’s name not his tomb or the adjacent area. It provided the king with one of the many ways the ancient Egyptians believed a person could survive the decay of mortality. The two ropes represent the two ropes of time that are spooled out by the gods (See The Book of Gates). The shen ring, in our opinion, was principally a symbol of eternity.

Let us know what you think?