Paintings from the tomb of Nebamun 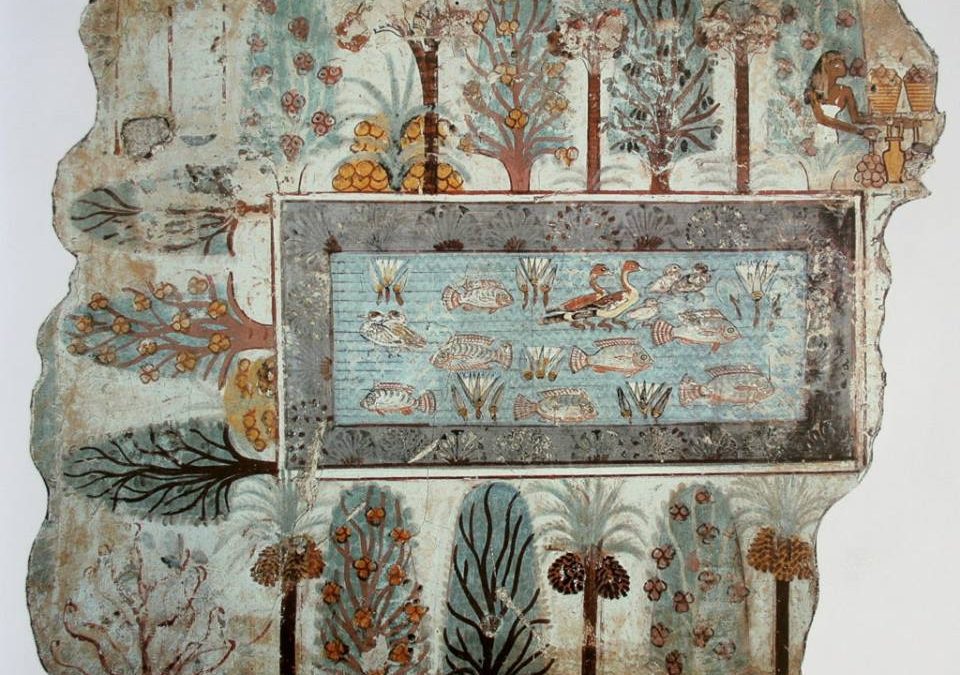 This beautiful illustration is laid out in typical ancient Egyptian style. The strange but charming perspective is called ‘aspective’ and it is the opposite of our modern western view called ‘perspective’. The aim of the ancient Egyptian artist was to show all the essential details of a thing or person from a universal, not a personal viewpoint.

The image of the pond is a halcyon one, the animals, fishes and trees represent the peace and tranquillity of the ideal afterlife. The colours are cool and tranquil to illustrate the peace and comfort of life in the Hereafter. Heaven was not perceived as a garden but gardens were thought of as heavenly.

The painting is one of 11 paintings acquired by the British Museum from the tomb-chapel of a wealthy Egyptian official called Nebamun in the 1820s. Dating from about 1350t BC, they are some of the most famous works of art from Ancient Egypt.

The Tomb of Nebamun is from  Dynasty XVIII. It was located in the Theban Necropolis on the west bank of the Nile at Thebes (present-day Luxor), in Egypt. The tomb was the source of a number of famous decorated tomb scenes that are currently on display in the British Museum, London.

Nebamun (c 1350 BCE) was a middle-ranking official scribe and grain counter at the temple complex in Thebes. His tomb was discovered in 1820 by a young Greek adventurer called Giovanni (“Yanni”) d’Athanasi, who was acting as an agent for Henry Salt, the British Consul-General. The tomb he found had plastered walls  that were richly and skilfully decorated with fresco paintings, depicting idealised views of Nebamun’s life and activities.

D’Athanasi and his workmen literally hacked out the pieces he wanted with knives, saws and crowbars. Salt sold these works to the British Museum in 1821, though some of other fragments became located in Berlin and possibly Cairo. D’Athanasi later died in poverty without ever revealing the tomb’s exact location.

The best-known of the tomb’s paintings include Nebamun fowl hunting in the marshes, dancing girls at a banquet, and a pond in a garden. In 2009 the British Museum opened up a new gallery dedicated to the display of the restored eleven wall fragments from the tomb. They have been described as the greatest paintings from ancient Egypt to have survived, and as one of the Museum’s greatest treasures

The frescoes are now on display together for the first time at the British Museum. Following the restoration process they now give a true impression of the colour that would have been experienced by the ancient visitors to the tomb-chapel.

Objects dating from the same time period and a 3-D animation of the tomb-chapel help to set the tomb-chapel in context and allow visitors to experience how the finished tomb would have looked.

Julia Herdman is currently working on the first book to tackle the subject of Ancient Egyptian Sacred Numbers for over a hundred years. To support this work please visit https://www.gofundme.com/Help-Us-Finish-Ancient-Egypt-Books