A Labour in Vain – The Tragic Death of Princess Charlotte Augusta 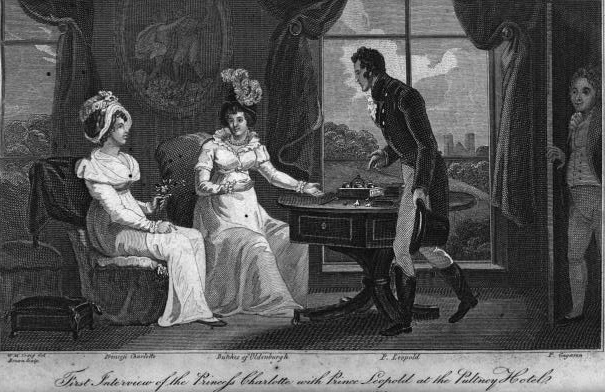 Princess Charlotte August was in labour for more than two days before she died on 6th November 1817.

Princess Charlotte Augusta of Wales (1796 – 1817) was the only child of George, Prince of Wales (later King George IV) and Caroline of Brunswick. If she had lived Charlotte would have become Queen of the United Kingdom.

Before her marriage, Charlotte was what we might call a ‘wild child’. She was a good horsewoman and a bit of a ‘tomboy.’

Charlotte’s parents loathed the sight of each other and separated soon after she was born. Her father debauched himself with every form of excess except fatherly love and attention. Her mother lived the lonely life of an abandoned woman. As an only child, Charlotte’s welfare was left in the hands of palace staff and her estranged mother whom she visited regularly at her house in Blackheath.

As Charlotte entered her teenage years, members of the Court considered her behaviour undignified. Lady de Clifford complained about her ankle-length underdrawers that showed. Lady Charlotte Bury, a lady-in-waiting to her mother Caroline described the Princess as a “fine piece of flesh and blood” who had a candid manner and rarely chose to “put on dignity”. Her father, however, was proud of her horsemanship and her tolerably good piano playing.

By the time she was age 15, the curvey Charlotte looked and dressed like a woman; she developed a liking for opera and men and soon became infatuated with her first cousin, George FitzClarence, the illegitimate son of the Duke of Clarence.

To put an end to the budding romance FitzClarence was called to Brighton to join his regiment, and Charlotte’s gaze fell on Lieutenant Charles Hesse of the Light Dragoons, reputedly the illegitimate son of Charlotte’s uncle, Prince Frederick, Duke of York and Albany.

Her mother colluded with Charlotte as far as Hesse was concerned not because she approved of the romance but to peeve her husband who did not. Caroline allowed the pair to meet in her apartments but the liaison was shortlived. Britain was at war with France and Hesse was called to duty in Spain.

Charlotte finally settled on the dashing young Prince Leopold of Saxe-Coburg-Saalfeld, Leopold had a commission in the Imperial Russian Army and fought against Napoleon after French troops overran Saxe-Coburg until Napoleon’s defeat at Waterloo.

The marriage ceremony was set for 2 May 1816. The war with France was over and the people of London were in the mood to celebrate. On the wedding day, huge crowds filled the streets and at nine o’clock in the evening in the Crimson Drawing Room at Carlton House, with Leopold dressing for the first time as a British General (the Prince Regent wore the uniform of a Field Marshal), the couple were married. Charlotte’s wedding dress cost over ₤10,000, an enormous sum of money – the average doctor earned less than £300 per year. The only mishap was during the ceremony happened when Charlotte was heard to giggle when the impoverished Leopold promised to endow her with all his worldly goods.

At the end of April 1817, Leopold informed the Prince Regent that Charlotte was pregnant and that there was every prospect of the Princess carrying the baby to term.

The mum to be Charlotte spent her time quietly, however, spending much time sitting for a portrait by Sir Thomas Lawrence. She ate heavily and got little exercise; when her medical team began prenatal care in August 1817, they put her on a strict diet, hoping to reduce the size of the child she was carrying. The diet and occasional bleeding they subjected her to seemed to weaken Charlotte and did little to reduce her weight.

Much of Charlotte’s day to daycare was undertaken by Sir Richard Croft. Croft was not a physician, but an accoucheur, or male midwife. Male midwives were much in fashion among the well-to-do. In, ‘The Princess Charlotte of Wales: A triple obstetric tragedy’ Sir Edward Holland (J Obst & Gynaec Brit Emp 58:905-919, 1951) describes Sir Richard Croft as a diffident, sensitive man without much self-confidence despite his skill and experience. “He was not the sort of man to deviate from the rules of practice by doing something unconventional or risky. He played it by the book, but his library was small.”

Charlotte was believed to be due to deliver on 19 October, but as October ended, she had shown no signs of giving birth and drove out as usual with Leopold on Sunday 2 November. On the evening of 3 November, her contractions began. Sir Richard encouraged her to exercise, but would not let her eat: late that evening, he sent for the officials who were to witness the birth of the third in line to the throne.

A Labour in Vain

The first stage of labour lasted 26 hours, which is not uncommon for a first child. With the cervix fully dilated, Croft sent for Dr. Sims, perhaps because the uterus was acting inertly and irregularly, and also because, should a forceps delivery be necessary, Sims had been chosen consultant on that point. Sims was the “odd man out” among the four doctors; his principal work was as a botanist and editor, but he was also physician to the Surrey Dispensary and Charity for Delivering Poor Women in their Homes.

Almost certainly the outcome would have been better had the second stage of labour not lasted as long as the first. The optimal time the second stage is around two hours. Dr. Sims arrived at 2:00 am on November 5 after the second stage had been in progress for about seven hours.

Thirty-three hours after Charlotte’s labour had began Dr. Sims was ready with the forceps, but his assistance was not called for. Croft continued to let nature take its course. After 15 hours of second-stage labour, about noon on November 5, meconium-stained amniotic fluid appeared. Three hours after that, the baby’s head appeared. At nine o’clock in the evening of 5 November, Charlotte finally gave birth to a stillborn boy weighing nine pounds. Efforts to resuscitate the child proved fruitless. Onlookers commented that the dead child was a handsome boy, resembling the Royal Family.

The third stage of labour was no less distressing. Croft informed Sims that he suspected an hourglass contraction of the uterus. This happens when the placenta gets trapped in the upper part of the womb as it contracts  Croft removed the placenta manually with some difficulty, and it seemed to do the trick. Soon after midnight, Charlotte began vomiting violently and complaining of pains in her stomach. Croft returned to Charlotte’s bedside to find her cold to the touch, breathing with difficulty, and bleeding profusely. He placed hot compresses on her, the accepted treatment at the time for postpartum bleeding, but the bleeding did not stop. Charlotte died an hour and a half later.

Charlotte had been Britain’s hope: George III and Queen Charlotte, had had thirteen children but only Charlotte survived. She was the sole legitimate heir to the throne of Great Britain and Ireland. Her father, with his spendthrift behaviour and penchant for womanising, was already unpopular with the public and his brothers were viewed in much the same light. The Prince of Wales’s girth and reputation for gluttony prompted his critics to dub him the “Prince of Whales.” The people were devasted by Charlotte’s tragic death.

Post-mortems on Charlotte and her stillborn son exonerated the Croft from any wrong-doing. The postmortem results showed Charlotte died because she lost too much blood, her baby because of lack of oxygen. In 1817 there were no blood transfusions for Croft to call on when Charlotte began to lose blood but he could have done things differently and she may not have died. Croft decided not to use forceps, had he Charlotte and her baby might have been saved. Croft was following fashion and the dictum of Dr. Denman an authority of midwifery and childbirth at the time. Since the death of the hugely influential Scottish obstetrician William Smellie’s in 1760, the use of forceps had fallen into disfavour because of the injuries that could be caused by the instrument when used by unskilled accoucheurs. Hundreds of unskilled or partially trained doctors were operating in Britain’s unregulated medical market at the time. The late Dr. Denman had overreacted to these injuries and had advocated a policy of “Let nature do the work. …The use of forceps ought not to be allowed from any motives of eligibility (i.e. of choice, election, or expediency). Consider the possible mistakes and lack of skill in younger practitioners.”

Denman had however hedged his position with a qualification: “Care is also to be taken that we do not, through an aversion to the use of instruments, too long delay that assistance we have the power of affording. In the last edition of his book (1816, posthumously) he wrote: “But if we compare the general good done with instruments, however cautiously used, with the evils arising from the unnecessary and improper use, we might doubt whether it would not have been happier for the world if no instrument of any kind had ever been contrived for, or recommended in the practice of midwifery.”

Croft had relied on Denman’s ultraconservative precepts, his passive obstetrics was just as dangerous as meddlesome obstetrics. The adroit accoucheur steered a middle course, but Croft was not adroit. Three months later, Croft was involved in a similar case, and, when the patient died, he shot himself with a pistol he found in the house. What happened in the wake of Princess Charlotte’s death was too much for Croft to bear.

By today’s standards, the first and second stages of Charlotte’s labour were far too long. Modern obstetricians would use forceps to extract the baby and drugs would be given to speed-up and strengthen the contractions.The most recent CEMD report indicates that in 2009-12, 357 women died during or within 6 weeks of the end of their pregnancy. This represents a decrease in the maternal mortality ratio (MMR) from 11 (2006-8) to 10.12 per 100,000 live births (2010-12), mainly due to a decrease in deaths due to direct obstetric causes. However, there has been no change in the MMR for indirect maternal deaths in the last 10 years; the current ratio (6.87 per 100,000 live births) is almost twice that of direct deaths (3.25 per 100,000 live births).