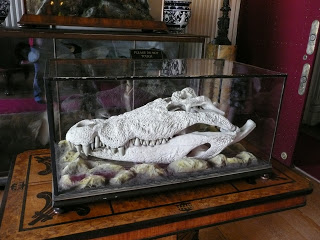 Julia Herdman is fascinated by 18th-century cabinets of curiosities because they show a love of learning and the natural world.  The 18th century saw a huge growth in the public interest in science and medicine. Cabinets of curiosities were a feature of many large houses because they were a way to show that their owners were taking an intellectual interest in the world. The 18th century was a time when it was cool to show off one’s intellectual prowess. Most of the collections consisted of rocks and minerals, shells, feathers and small animal skeletons. Cabinets of curiosities were works of art and a popular way to establish and uphold the owner’s rank in society. Because of the wonderful things they had in them these collections were sometimes called ‘wonder rooms.’ They were collections of the most extraordinary objects.

Peter The Great’s Cabinets of Curiosities

Russian Emperor, Peter the Great created his Kunstkamera in Saint Petersburg in 1714. It was a haphazard collection rarities with an emphasis on natural specimens.”, rather than the man-made objects called “artificialia”. 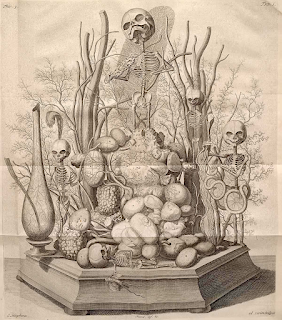 Peter was interested in anatomy because he wanted to improve Russian medicine. He encouraged research into human deformities by issuing a royal edict requiring examples of malformed and still-born infants to be sent to the imperial collection where he put them on display as examples of accidents of nature. This collection of human specimens became the core of the Russian Academy of Sciences.

In 1716, he added a mineral cabinet to the Kunstkamera, with the purchase of a collection of 1195 minerals. Russian minerals were added to the collection that eventually became the core of the Fersman Mineralogical Museum in Moscow.

Peter the Great also bought many specimens from Holland particularly from the pharmacologist, Albertus Seba, and the anatomist, Frederik Ruysch (1638 – 1731).

The illustration shows one of the scenes created by Ruysch and displayed in his museum in Amsterdam. Ruysch’s creations were so intricate and detailed they were known as 8th wonders of the world. Ruysch’s daughter prepared the delicate cuffs and collars that were slipped on to arms and necks of the skeletons which were positioned to show them crying into handkerchiefs. To add to the bizarre scene the skeletons were wearing strings of pearls and playing the violin. Ruysch was an expert showman and a scientist. His dissections were public spectacles held by candlelight and accompanied by music and refreshments. A major new voice in historical fiction.

In Britain, the anatomists, John and William Hunter were renowned collectors of curiosities. The brothers collected what is called the  Hunterian Collection which is split between London and Glasgow.

William Hunter played a prominent role in the most prestigious cultural and scientific institutions of the 18th century, both in Britain and abroad. He appears in Zoffany’s painting, Life Class at the Royal Academy (1771-1772). He also appears in James Barry’s Distribution of the Premiums by the Royal Society of Arts and Manufactures (1777-1783).

The curiosities he collected are now on display at the University of Glasgow. The exhibition explores Hunter’s personal and professional life and highlights both his passion for collecting and his hugely successful career as a royal physician, outstanding teacher of anatomy and surgery and pioneering scientific researcher. It is one of the best-known collections in the country and contains 650 manuscripts,10,000 printed books, 30,000 coins.r new voice in historical fiction 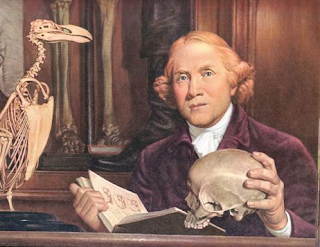 John Hunter FRS (1728 – 1793) was one of the most distinguished scientists and surgeons of his day. He came to London in 1748 at the age of 20 and worked as an assistant in the anatomy school of his elder brother William (1718-83), who was already an established physician and obstetrician. He was an early advocate of careful observation and scientific method in medicine. John Hunter was a great showman and entrepreneur as well as one of London’s most famous surgeons.

Hunter devoted all his resources to his museum. It included nearly 14,000 preparations of more than 500 different species of plants and animals. As his reputation grew, he was supplied with rare specimens such as kangaroos brought back by Sir Joseph Banks from James Cook’s voyage of 1768-71.

In his lifetime, John Hunter collected and prepared thousands of natural specimens, which he displayed in his museum including the skeleton of the Irish Giant Charles Byrne. In 1799, the British government purchased the collection and presented to the Royal College of Surgeons. 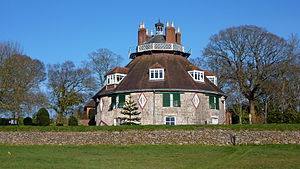 A La Ronde is an 18th-century 16-sided house located near Lympstone, Exmouth, Devon, England, and in the ownership of the National Trust.

Collecting was not just the rage for anatomists and princes. Curious Parsons and Lords of the manor had their own cabinets of curiosities. It was part of what has been called the 18th century’s elite ‘learned entertainment.’

Many houses had cabinets of curiosities; one of the most beautiful collections of seashells was gathered by two spinster cousins, Jane and Mary Parminter. The two cousins became greatly attached to each other and in 1795 decided to set up home together in Devon.

The sisters created a magical world in their sixteen-sided house with diamond-shaped windows. The spinster cousins went on a tour around Europe and were avid collectors. They decorated the walls of their quirky house lovingly with hundreds of feathers and shells. They crafted pictures using sand, seaweed, and card and hung them on the walls. The cabinet of curiosities in the library is jam-packed with a jumble of Parminter family souvenirs such as shells, beadwork, semi-precious stones and votive statues. This is a real treasure house with every nook and cranny crammed with bizarre items collected over the years.  It is a treasure trove overflowing with everything from ancient Egyptian artifacts and precious rocks to prints from Switzerland. The cousins lived secluded and somewhat eccentric lives for many years. Their happy lives together came to an end in 1811 when Miss Jane died. A major new voice in historical fiction. 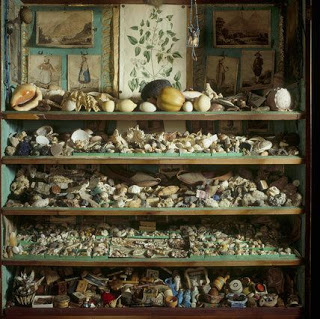 Cabinet of shells from La Ronde