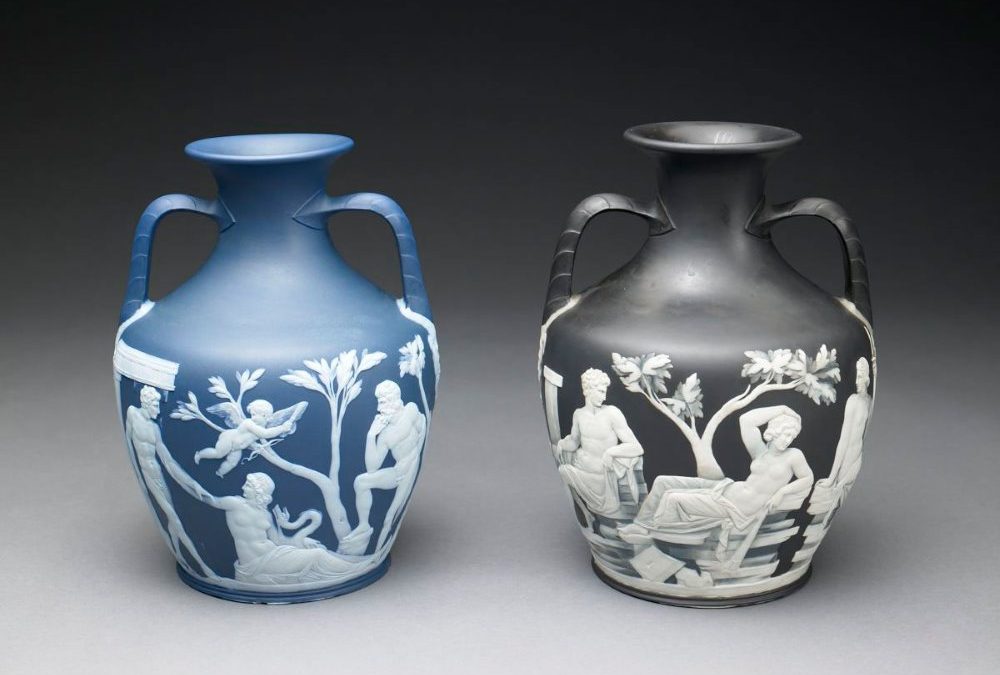 The story of the Portland Vase encapsulates so much about the 18th century. It is a story of fascination with the classical world, the acquisition of antiquities and of technological and artistic excellence of British manufacture.

The vase that is known as the Portland Vase is a Roman cameo glass vase, dated to between AD 1 and AD 25. Sir William Hamilton, the British ambassador in Naples, purchased it in 1778-1780 from James Byres, a Scottish art dealer, who had acquired it after it was sold by Cornelia Barberini-Colonna, Princess of Palestrina. Hamilton brought it to England and sold it to Margaret Cavendish-Harley, widow of William Bentinck, 2nd Duke of Portland.

The vase is a Roman two-handled glass amphora dating to between the second half of the 1st century BCE and the early 1st century CE. It has a cameo-like effect decoration which perhaps depicts the marriage of Peleus and Thetis from Greek Mythology.  Standing  24.5 cm in high and 17.7 cm at its maximum width it was made by blowing the dark cobalt blue coloured glass covered with a layer of opaque white cased glass. Large areas of the white glass were then removed to reveal the underlayer of blue. Areas of white were left and carved in relief to depict the scenes. The style of the decoration has led scholars to date the piece to the reign of the first Roman Emperor Augustus (27 BCE – 14 CE). The fineness of detail of the decorative scenes is comparable to the highest quality Roman cut-gems and so it must be the work of a superbly talented gem-cutter or diatretarius.

The scenes on the vase are divided into two parts by a bearded head (perhaps with horns), one under each handle. The first scene has four figures which include a young man leaving a shrine in the countryside and wearing a cloak. The man holds the arm of a semi-naked woman sitting on the ground preoccupied with stroking an animal resembling a snake. Above the woman is the flying figure of Eros with his customary bow and a torch in his right hand. On the right is a bearded male standing between two trees and depicted in a contemplative mood with his chin resting on his hand.

The second scene on the other side of the vase shows three figures all sitting on rocks with a background of a single tree. On the left is a young male next to a column or pillar, whilst in the centre is a young woman with her arm raised to her head and holding a torch which hangs down to the ground. On the far right is another half-dressed woman who holds a sceptre or staff in her left hand.

The two-handled amphora vase is incomplete as it has lost its pointed base and the mouth of the vessel is curiously uneven in the cut. The base was repaired using a similar coloured disk carved in the same style and depicting Paris. Although it is remarkable that such a delicate object has survived at all from antiquity, the vase is not unique, as a similar type vase has been found at Pompeii which dates to the mid-1st century CE and depicts scenes from a grape harvest. However, these cameo-cut vessels are regarded as something of an experiment in Roman glassware, carried out in a limited period spanning just two generations, so they were almost certainly not commonly produced.

It was sold again in 1786 and passed into the possession of the duchess’s son, William Cavendish-Bentinck, the 3rd Duke of Portland who lent it to Josiah Wedgwood who copied it in his new jasperware.

Wedgwood devoted four years of painstaking trials to achieve the perfection required to replicate the vase. He had problems with cracking and blistering and the sprigged reliefs ‘lifted’ during firing. In 1786 he feared that he would never be able to apply the Jasper relief thinly enough to match the glass original’s subtlety and delicacy. However, his copy of The Portland Vase was placed in a private exhibition in Greek Street, Soho, during April and May 1790. The exhibition was so popular that visitor numbers had to be restricted.

Wedgewood’s success inspired a 19th-century competition to duplicate its cameo-work in the glass, with Benjamin Richardson offering a £1,000 prize to anyone who could achieve that feat. Taking three years, glassmaker Philip Pargeter made a copy and John Northwood engraved it, to win the prize. This copy is in the Corning Museum of Glass in Corning, New York.

After a long history of changes in ownership, disaster struck in 1845 when the vase was smashed to pieces in the British Museum. Fortunately, it has since been painstakingly restored so that it can once more take its rightful place amongst the very finest masterpieces of Roman art.

The Wedgwood Museum, in Barlaston, near Stoke-on-Trent, contains a display describing the trials of replicating the vase, and several examples of the early experiments are shown.

The original Roman vase can be seen in the British Museum. 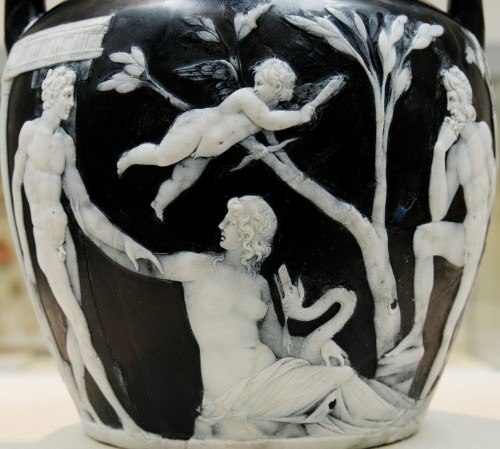