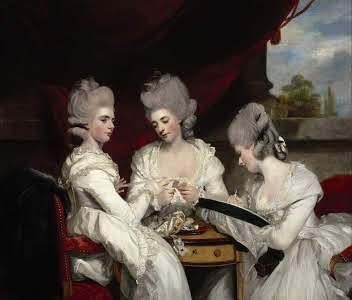 British art has always been slightly different from that of mainstream Europe. Perhaps it’s because we’re an island. European painting in the eighteenth century is generally conceived as radiating from Paris. There was a strong move during the course of the 18th century towards the development of a national school – a desire for academies of art where the latent English genius could be nurtured.

French Rococo portraits and decorative mythologies invaded Germany, the Scandinavian countries, and Russia and the French influence was powerful in Rome and Spain but as the French Revolution approached, France, in the person of Jacques Louis David, took over the leadership of the emerging Neoclassical style (which perhaps originated in Rome) and established its primacy killing the age of Rococo and the Baroque.

The two great centres of resistance to Neoclassicalism are generally held to be Britain and Venice. During the 18th and 19th centuries, young members of the British upper classes broadened their education with the Grand Tour of continental Europe. They encountered a sophisticated level of artistic achievement that influenced their tastes as art patrons. To ensure similarly high standards in Britain, the Royal Academy was founded in London in 1769. Its first president was Sir Joshua Reynolds, a brilliant painter as well as an influential teacher and author whose Discourses authoritatively addressed many aesthetic topics—including the preeminence of history painting.

Landscape and romanticism were two key themes of two masters, John Constable and J.M.W. Turner. Constable’s true-to-life views of the verdant English countryside emphasized the essential harmony and purity of nature. Turner, on the other hand, was a romantic who expressively dissolved forms in terms of light and atmosphere. With their fresh vision and powerfully original styles, Constable and Turner profoundly influenced the work not only of many subsequent British painters but of countless other American and European artists as well.

The death of court painter Sir Godfrey Kneller in 1723 brought to an end the long dynasty of foreign artists who had dominated English painting for two hundred years. Kneller’s pupils and followers were conventional ‘portrait manufacturers’, whose work had neither life nor charm. It was left to his pupil and son-in-law, William Hogarth, to restore English fine art painting to dignity and honour.

The young artist William Hogarth broke the mould of Britsh art in the 1730s when he began his series of moral fables in paint. Hogarth’s earlier style, although strongly personal, is an English variation on the style of the French Rocco painter Watteau and his contemporaries but Hogarth’s moral fables fit in exactly with that climate of Enlightenment thought which was to produce Diderot and the Encyclopedists. William Hogarth dominates English art in the first half of the century. Scornful of portraiture, he single-handedly created a new genre, the ‘Modern Moral Subject’, and introduced the original practice of paintings and engravings in series, and of telling a visual story.

Hogarth is called a moralist and a genius and is acknowledged as the first great English painter of modern times, but in his own lifetime, he waged a perpetual struggle for recognition and patronage in a society indifferent to native talent. He was the son of a schoolmaster and literary hack and born at Ship Court, Old Bailey in 1697. About 1712 his father apprenticed him to Ellis Gamble, a silversmith in Cranbourne Alley, Leicester Fields, from whom he learned something of the processes of engraving. He took to drawing, it is said because he wished to record the humours of London life as he saw them. He devised a system of drawing from memory so that he could record in the evening the things he had seen during the day. This, he believed, was the only way ‘living art’ could be produced.

In 1733 Hogarth settled in Leicester Fields, where he remained for the rest of his life with the exception of a brief trip to France in 1748. His trip resulted in the picture of “Calais Gate”, now in the National Gallery but while making a sketch of the old gateway Hogarth was arrested on a charge of espionage and, though subsequently released, the incident had the effect of confirming his truculent insularity which finds full expression in this picture.

Towards the end of his life, Hogarth contrived to produce satirical engravings and paintings. He also painted a fairly large number of portraits, and a few pictures in the “grand historical style”, which are not on a level with his other work. Late in life, he published his “Analysis of Beauty”, in which he expressed his own aesthetic ideals, and endeavored to establish a definite canon of taste. In 1757 he received some official recognition in his appointment as serjeant-painter to the king, but he died on 26th October 1764, four years too early to become one of the foundation members of the Royal Academy.

Illustration: The Ladies Waldegrave. Reynolds was particularly skilled at choosing poses and actions which suggested a sitter’s character and which also created a strong composition. Here, three sisters, the daughters of the 2nd Earl Waldegrave, are shown collaboratively working on a piece of needlework. The joint activity links the girls together. On the left, the eldest, Lady Charlotte, holds a skein of silk, which the middle sister, Lady Elizabeth, winds onto a card. On the right, the youngest, Lady Anna, works a tambour frame, using a hook to make lace on a taut net.