The Duchess of Hamilton 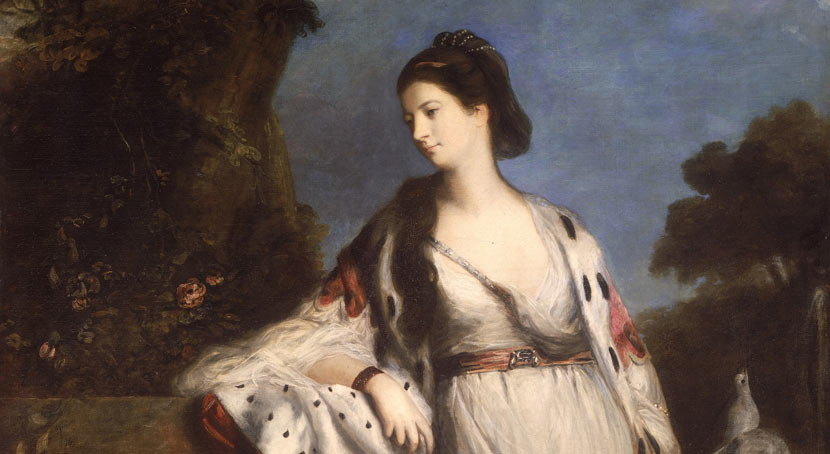 The Duchess of Hamilton was born in Ireland, Elizabeth Gunning. She was a celebrity beauty who caused a sensation when she and her sister were introduced into high society. Though the sisters had neither dowries nor rank, their physical attractiveness secured them excellent marriages. Elizabeth married the Duke of Hamilton on St Valentine’s Day in 1752, only weeks after meeting him at a masquerade. This is a graceful portrait by the neo-classical painter, Gavin Hamilton, who was a distant relative of the Duke. Hamilton also produced an elegantly-draped full-length portrait of Elizabeth.

In late 1740 or early 1741, the Gunning family returned to John Gunning’s ancestral home in Ireland, where they divided their time between their home in Roscommon and a rented house in Dublin. According to some sources, when Maria and her sister Elizabeth came of age, their mother urged them to take up acting in order to earn a living, due to the family’s relative poverty. The sources further state that the Gunning sisters worked for some time in the Dublin theatres, befriending actors like Margaret Woffington, even though acting was not considered a respectable profession as many actresses of that time doubled as courtesans to wealthy benefactors. However, other sources[who?] differ and point out that Margaret Woffington did not arrive in Dublin until May 1751, by which time Maria and her sister Elizabeth were in England.

In October 1748, a ball was held at Dublin Castle by the Viscountess Petersham. The two sisters did not have any dresses for the gathering until Tom Sheridan, the manager of one of the local theatres, supplied them with two costumes from the green room, those of Lady Macbeth and Juliet. Wearing the costumes, they were presented to the Earl of Harrington, the then Lord Lieutenant of Ireland. Harrington must have been pleased by the meeting as, by 1750, Bridget Gunning had persuaded him to grant her a pension, which she then used to transport herself, Maria, and Elizabeth, back to their original home in Huntingdon, England. With their attendance at local balls and parties, the beauty of two girls was much remarked upon. They became well-known celebrities, their fame reaching all the way to London, with themselves following soon afterward. On 2 December 1750, they were presented at the court of St James. By this time, they were sufficiently famous that the presentation was noted in the London newspapers. Elizabeth was also immortalised in portraits by Gavin Hamilton a distant relation of the Duke. 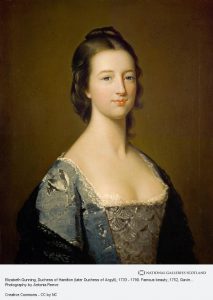