The Palazzo del Re – Home of the Stuarts in Exile 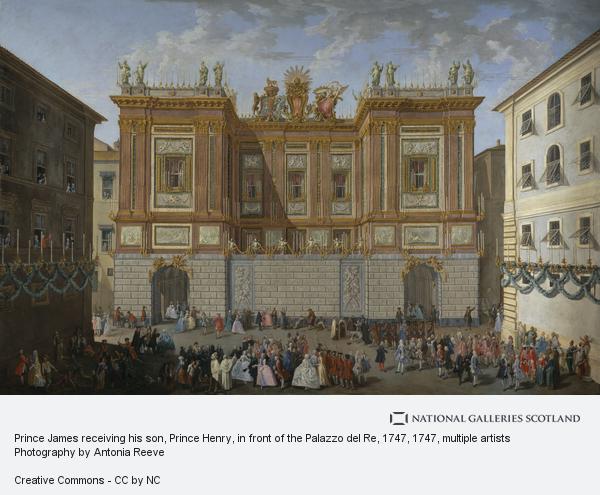 The Palazzo del Re was home to the exiled Jacobite court and the Stuarts in Rome. Owned by the Muti family, it was rented by the Papacy for the Old Pretender, James Francis Edward Stuart. Both James’s sons, Charles Edward (‘Bonnie Prince Charlie’) and Henry Benedict, were born in the palace. The event depicted here is a celebration organised in honour of Henry’s appointment as a cardinal deacon on 3 July 1747. James, wearing the blue sash of the Order of the Garter, is shown greeting his younger son, who is dressed in the black coat, scarlet stockings and shoes with red heels often worn by cardinals in the eighteenth century. The palace itself has been lavishly ‘dressed’ with temporary architectural decoration, somewhat like a theatre set.

During their long exile, the Stuart dynasty commissioned a steady stream of portraits and subject pictures as propaganda for the Jacobite cause. The Portrait Gallery has an extensive collection of images of the deposed King James VII and II and of his son Prince James and grandson Prince Charles Edward (‘Bonnie Prince Charlie’), many of them of high quality by the leading artists of the day. This picture occupies a special place among this wealth of material. It is large, colourful and celebratory but the apparently joyful mood here belies some harsh political truths. In reality, the painting captures a moment when the Jacobite ambi­tion of re-establishing a Stuart monarchy in Great Britain was effectively at an end.

After their disastrous defeat at Culloden in 1746, the Stuarts were left politically isolated and vulnerable. In Rome, Prince James, the Old Pretender, finally acceded to the desire of his younger son Henry to become a Cardinal, immediately guaranteeing not just a degree of status but also much-needed financial security for the family. But for Henry’s older brother, Charles Edward, this pragmatic move was a catastrophe. By linking the Stuarts so closely to the papacy, it was clear that any hope of reviv­ing Jacobite sympathy back in Britain was now fatally undermined. Charles Edward refused to return to Rome and never saw his father again.

Our picture was commissioned to celebrate Henry’s appointment as Cardinal in 1747. In the foreground, James, wearing the bright blue Order of the Garter, stands with his court outside his residence, the Palazzo del Re, to greet his son, shown in a cardinal’s costume of black coat and scarlet stockings. A recent papal regulation required that new car­dinals should decorate their home with a false façade and provide a fete for the local populace. In the background, the palace is dressed with temporary architectural decoration to create an elaborate backdrop for the celebrations, with the arms of the English monarchy and the papacy promi­nently on display on top of the palace. The foreground is filled with incident to evoke a festive if somewhat unruly mood among the onlookers. Alongside the fashionable courtiers here are parading soldiers, beg­gars scrambling for coins and even some figures fighting. Elsewhere, musicians are preparing to play while food for a banquet is carried into the palace.

Until comparatively recently, the identity of the maker of this work was uncertain and it carried a traditional attribution to Giovanni Panini, the great Italian painter of topographical views. After it was acquired in 2001, an examination in the Gallery’s conservation studios indicated that more than one artist was involved in painting the figures as well as the background, and it now appears to be the work of three minor artists. It is nonetheless a fascinating document in which pomp and theatricality, colour and noise, mask the poignant significance of the event for a dynasty now destined to remain permanently in exile.

This text was originally published in 100 Masterpieces: National Galleries of Scotland, Edinburgh, 2015.