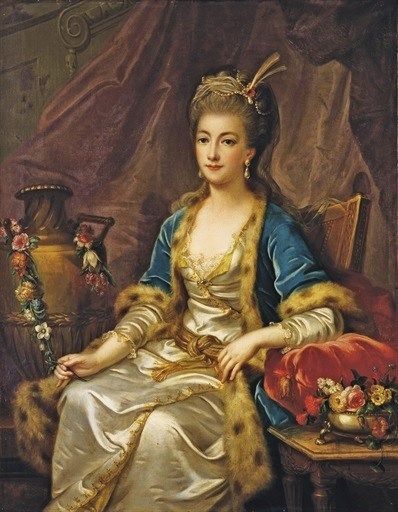 Turquerie was the fashion for all things Turkish. It started in the late sixteenth century and lasted well into the nineteenth. unconcerned with the realities of life in the east it was rather a product of European fantasies about the luxuries of the Orient. Turkey was a supplier of exotic goods such as coffee, perfumes, spices, and tea.

First diplomatic relations with the far east started near the end of the sixteenth century with Sir Robert Shirley going to Persia in 1599 to train the Persian army in the ways of English military warfare.

The West had a growing interest in Turkish-made products and art, including music, visual arts, architecture, and sculptures.

This fashionable phenomenon became more popular through trading routes and increased diplomatic relationships between the Ottomans and the European nations, exemplified by the Franco-Ottoman alliance in 1715 when Louis XIV received the first Persian ambassadors to France.

European portraits of the 18th century were used to portray social position and wealth. Dress, posture, and props were carefully selected in order to communicate the appropriate status. Choosing the exotic turquerie style to express one’s elite position in society involved wearing loose, flowing gowns belted with ornate bands of embroidered cloth. Some sitters donned ermine-trimmed robes while others chose tasselled turbans. Scandalously, most have abandoned their corsets and attached strings of pearls to their hair. (There has always been one law for the rich and one for the lower classes when it comes to letting one’s social hair down.) Many portraits have Turkish carpets displayed on the floor, woven with bright colours and exotic designs. The loose clothing and the unorthodox styles added to the lewd perceptions of the Ottomans.

At the same time portraits of real Turkish people by European artists were a la mode. They were often depicted as exotic, and it was rare that portraits were painted without wearing their traditional cultural clothing.

Perhaps the most influential transformation into the turquerie vogue in Europe was done by Lady Mary Wortley Montagu. Montagu went to Turkey in 1717 when her husband was posted as ambassador there. Her collected letters while there, describing Turkish fashion were distributed widely in manuscript form. They were then printed after her death in 1762. These letters helped shape how Europeans interpreted the Turkish fashion and how to dress. This phenomenon eventually found its way across the Atlantic and in colonial America, where Montagu’s letters were also published.