Empress Elizabeth – A woman who wanted to sleep with common people 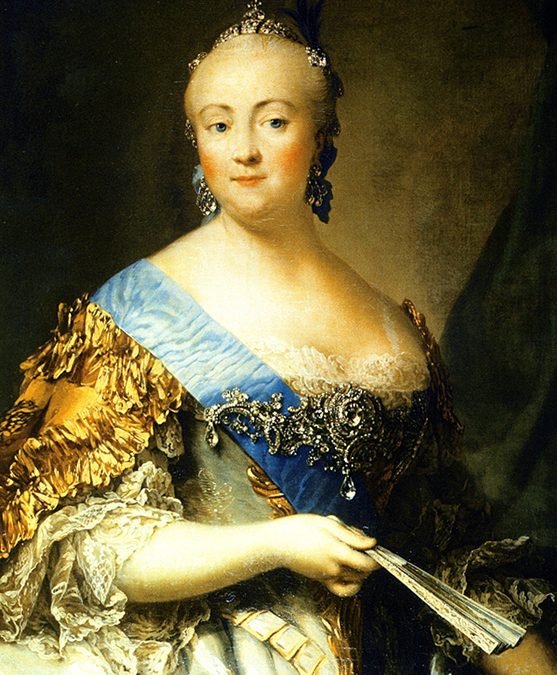 This story is about an Empress with a taste for the common man. Just like Jarvis Cocker’s Greek girl in the Pulp classic, ‘She wanted to sleep with the common people’.

Daughter of a Housemaid and an Emperor

Elizabeth Petrovna was born at Kolomenskoye, near Moscow, on 18 December 1709. She was the daughter of Peter the Great, Tsar of Russia, by his second wife, Catherine, a maid in the household. Her parents were said to have married secretly at the Cathedral of the Holy Trinity in St. Petersburg at some point of time between 23 October and 1 December 1707 then they married officially 5 years later when Peter legitimised his daughters, Anna and Elizabeth.

Although Catherine bore five sons and seven daughters for Peter only two daughters, Anna (b. 1708) and Elizabeth (b. 1709) survived to adulthood. As a child, Elizabeth was the particular favourite of her father. She resembled him both physically and temperamentally. She was a bright girl, if not brilliant, but received only an imperfect and desultory formal education.

Even though he adored his daughter Peter did not devote time or attention to her education. He had a son and a grandson from his first marriage and did not anticipate that a daughter born to his second wife might one day inherit his throne. Indeed, no woman had ever sat upon the throne of Russia and there was no expectation one ever would.

Empress Elizabeth as a Child

As a child, the young Empress Elizabeth had a French governess and grew fluent in Italian, German and French. She was also an excellent dancer and rider. Like her father, Elizabeth was physically active and loved riding, hunting, sledding, skating, and gardening. The wife of the British ambassador described Elizabeth as “fair, with light brown hair, large sprightly blue eyes, fine teeth, and a pretty mouth. She is inclinable to be fat, but is very genteel and dances better than anyone I ever saw. She speaks German, French and Italian, is extremely gay and talks to everyone…”

In 1724 Peter betrothed his daughters to two young princes, first cousins to each other, from the tiny north German principality of Holstein-Gottorp. Anna Petrovna, aged 16, was to marry Charles Frederick, Duke of Holstein-Gottorp, who was then living in Russia as Peter’s guest after having failed in his attempt to succeed his maternal uncle as King of Sweden. Sometime later the young Empress Elizabeth was betrothed to Charles Frederick’s first cousin, Charles Augustus of Holstein-Gottorp, the eldest son of Christian Augustus, Prince of Eutin. Anna’s wedding took place in 1725 as planned, even though her father had died only a few weeks before the nuptials. In the future Empress Elizabeth’s case, however, the planned marriage never happened as her fiancé died on 31 May 1727 before the wedding could be held. Unfortunately Elizabeth’s mother Empress Catherine I (who had succeeded Peter the Great to the throne) also died on 17 May 1727 just two weeks before Elizabeth’s fiancé.

Empress Elizabeth as a Teenager

Thus, by the end of May 1727, Empress Elizabeth, aged 17, had lost both her parents and her fiancé, and her half-nephew Peter II was on the throne. Her marriage prospects immediately dried up. They did not improve when, three years later, Peter II died and was succeeded by the soon to be Empress Elizabeth’s first cousin, Anna wife of Peter the Great’s elder brother and her infant grandson Ivan. There was little love lost between the cousins and no prospect of either any Russian nobleman or any foreign prince seeking Elizabeth’s hand in marriage with her cousins on the throne. Nor could Elizabeth marry a commoner because it would cost her her title, claim to the throne and royal status.

Empress Elizabeth as a Woman 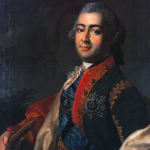 The Emperor of the Night

The woman who would one day be Empress Elizabeth’s solution was to take refuge in relationships with the lower classes. First, she took Alexis Shubin, a handsome sergeant in the Semyonovsky Guards regiment, as her lover. When Empress Anna found out she had  Shubin’s tongue cut out and he was banished to Siberia. Elizabeth then threw herself into the arms of a handsome coachman and then to a footman. Eventually, she found her long-term companion in Alexis Razumovsky, a young and handsome Ukrainian peasant with a good bass voice. Razumovsky had been brought from his village to St. Petersburg by his master, a nobleman, to sing for a church choir. Elizabeth purchased the talented serf from the nobleman and put him in her own choir. Razumovsky, a good-hearted and simple-minded man, never showed any personal ambition or interest in affairs of state during all the years of his relationship with Elizabeth. In return, Elizabeth was devoted to Razumovsky, and there is reason to believe that she might even have married him in a secret. In 1756 Elizabeth would make him a Prince and a Field Marshal and in 1742 the Holy Roman Emperor made him a Count of the Holy Roman Empire but  at court, he was always known as the “the Emperor of the Night.”

When Empress Anna died her daughter-in-law, another Anna, became regent to her young son Ivan. It was a period of poor government, taxes were high and Anna was unpopular at court. A circle of the disaffected began to gather around Elizabeth and plans for a coup began.

On 25 November 1741, Elizabeth seized power with the help of the Preobrazhensky Regiment. Arriving at the regimental headquarters wearing a warrior’s metal breastplate over her dress and grasping a silver cross she challenged them: “Whom do you want to serve: me, your natural sovereign, or those who have stolen my inheritance?” Won over, the regiment marched to the Winter Palace and arrested the infant Emperor, his parents, and their own lieutenant-colonel, Count von Munnich. It was a daring coup and, amazingly, succeeded without bloodshed. Elizabeth had vowed that if she became Empress she would not sign a single death sentence, an extraordinary promise for the time but one which she kept throughout her life.

The question of Razumovsky and Elizabeth’s children remains unresolved and subject to many legends. The best-known pretenders were Augusta who became a nun under the name Dosifeya. She died in 1810 and was buried in the Romanov family crypt; another Princess Elizabeth was arrested in Livorno, Tuscany by Aleksei Grigoryevich Orlov and returned to Russia in February 1775, presumably she was trying to escape. She was then imprisoned in the Peter and Paul Fortress, where she died from tuberculosis. The legend of her being drowned during the floods of 1777 was the subject of a painting by artist Konstantin Flavitsky, 1864, which now hangs in the Tretyakov Galler. 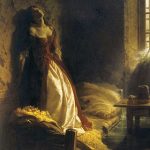 As a supposedly unmarried and childless empress, it was imperative for Elizabeth to find a legitimate heir to secure the Romanov dynasty. She chose her nephew, Peter of Holstein-Gottorp her sister’s son. Elizabeth was only too aware that the deposed Ivan VI, whom she had imprisoned in the Schlusselburg Fortress was a threat to her throne. Elizabeth feared a coup in his favour and set about obliterating him from history with orders that he should only be killed if he tried to escape, which of course he did when he tried to claim the throne after her death. The new queen Catherine gave the order and he was secretly executed and buried within the fortress.

Her nephew Peter was brought to Russia from Holstein and educated in Russian ways. He married Princess Sophie Friederike Auguste von Anhalt-Zerbst-Dornburg; she was nicknamed “Figchen” the daughter of Christian August, Prince of Anhalt-Zerbst of Anhalt. Her two of her first cousins became Kings of Sweden: Gustav III and Charles XIII and eventually, she would become Catherine the Great Empress of Russia.

The marriage took place on 21 August 1745. Nine years later, a son, the future Paul I, was finally born on 20 September 1754. There is considerable speculation as to the actual paternity of Paul I. It is suggested that he was not Peter’s son at all, but that his mother had engaged in an affair—to which Elizabeth had consented—with a young officer named Serge Saltykov, and that he was Paul’s real father. In any case, Peter never gave any indication that he believed Paul to have been fathered by anyone but himself. Elizabeth removed the young Paul and acted as if she were his mother and not Catherine. When the child was born the Empress had ordered the midwife to take the baby and to follow her. Catherine was not to see her child for another month and then on the second time briefly for the churching ceremony. Six months later Elizabeth let Catherine see the child again. The child had become a ward of the state to be brought up by Elizabeth as she believed he should be — as a true heir and great-grandson of her father, Peter the Great.

Under Elizabeth, the Russian court was one of the most splendid in all Europe. Foreigners were amazed at the sheer luxury of the sumptuous balls and masquerades and Elizabeth was said to be “the laziest, most extravagant and most amorous of sovereigns. Elizabeth created a world in which aesthetics reigned supreme. Historian Mikhail Shcherbatov wrote that her court was “arrayed in cloth of gold, her nobles satisfied with only the most luxurious garments, the most expensive foods, the rarest drinks, that largest number of servants and they applied this standard of lavishness to their dress as well.”

Clothing soon became the chosen means in Court by which to display wealth and social standing. Elizabeth is reported to have owned 15,000 dresses, several thousand pairs of shoes, and a seemingly unlimited number of stockings. She was known to never wear a dress twice and to change outfits anywhere from two to six times a day. Since the Empress did this her courtiers did as well. It is reported that to ensure no one wore a dress more than once to any ball or notably formal occasion, the Empress had her guards stamp each gown with special ink. Men at court were known to wear diamond buttons, own jewelled snuff boxes, and adorn their servants in uniforms made of gold.

In the late 1750s, Elizabeth’s health started to decline. She began to suffer a series of dizzy spells and refused to take the prescribed medicines. She forbade the word “death” in her presence. She died on 5 January 1762 and was buried in the Peter and Paul Cathedral in Saint Petersburg on 3 February 1762 after six weeks lying in state.

Not surprisingly her life has been dramatised in several films and novels. She appears in the 1934 film Catherine the Great (based on the play The Czarina by Lajos Bíró and Melchior Lengyel) which starred Flora Robson as Elizabeth. 1934 also saw the release of The Scarlet Empress, another filmed version of Catherine the Great’s story, this time with Louise Dresser in the role of Elizabeth. She was played by Olga Chekhova in the 1936 German film The Empress’s Favourite. The 1991 TV miniseries Young Catherine features Vanessa Redgrave in the role. Jeanne Moreau portrayed Elizabeth in the 1995 television movie Catherine the Great. She is also a major character in several episodes of the Japanese animated series, Le Chevalier D’Eon.