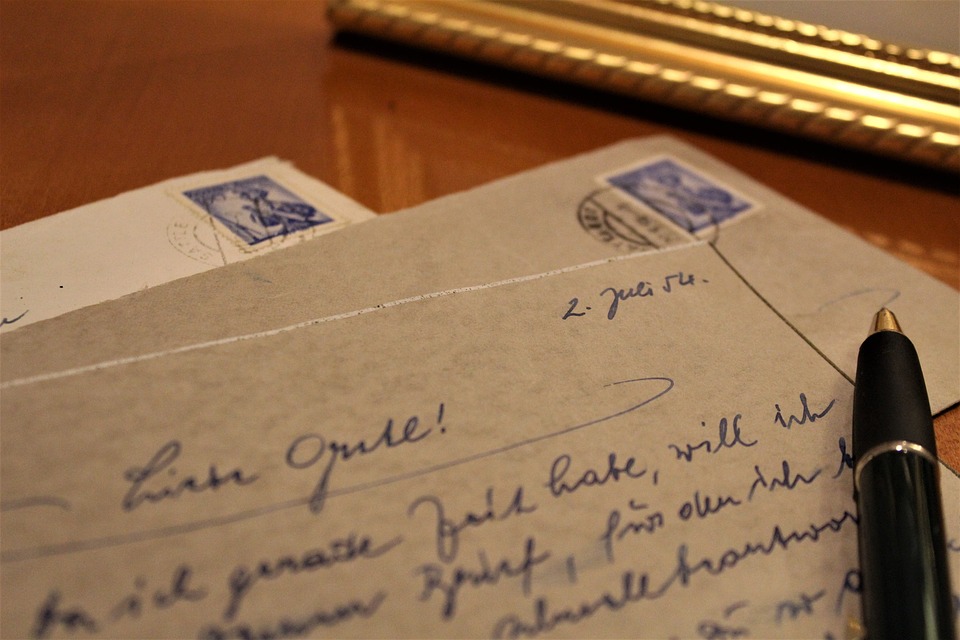 There would be no love letters without pens, ink and that luscious bright-red blob of sealing wax the heroine of the story cracks open at her dressing table. A good goose quill was the love letter writer’s standard kit until the invention of the metal dip nib pen in the 1820s. These quills glided beautifully over the soft handmade paper made from rags allowing the writer to let their feelings and emotions flow from heart to paper. According to the People’s Magazine: An Illustrated Miscellany for Family Reading, 1867, quills were usually about 10 inches long and a mature goose could provide about 20 feathers a year from which pens could be made. Many of the feathers were however imported from Russia as British geese could not meet the demand. At the height of the trade some 6,000,000 quills a year were being manufactured in Britain with a man able to make up to 800 a day.

The ink people used to write their love letters varied, some made their own using old recipes, some simply mixed a little water and soot while others bought expensive India Ink made from a type of fine soot, known as lampblack. India ink was sold in bottles and was a mainstay of writers for much of the previous two centuries.

By the Middle Ages, seals were appearing on legal documents. Perhaps the most famous seals were the papal bulls or ‘bulla’ which carried the metal seal (bulla), which was usually made of lead, but on very solemn occasions was made of gold. In the 18th century, the lead bulla was replaced with a red ink stamp of Saints Peter and Paul with the reigning Pope’s name encircling the picture, although missives of historic importance, e.g. the bull of Pope John XXIII convoking the Second Vatican Council, are still sealed with the traditional lead seal.

Ordinary folk however used wax. In the Middle Ages, the make-up of the sealing wax was typically beeswax and ‘Venice turpentine’, a greenish-yellow resinous extracted from Larch trees. The brilliant red colour comes from the addition of expensive vermilion made from the mineral cinnabar. From the 16th century onwards, other ingredients were added such as shellac to give the wax a glossy shine. By the mid-nineteenth century, a variety of colours was available including gold. This golden colour was achieved by the addition of the mineral mica. The use of sealing wax diminished with the introduction of the gummed envelope but that took much longer than you might think.

By the early years of Queen Victoria’s reign, the Mulready envelope had appeared in England, it was a prepaid postal wrapper and forerunner of the modern envelope. Edwin Hill and Warren De La Rue were granted the first British patent for an envelope-making machine in 1845. These envelopes were not what we think of as an envelope today. They were made from a lozenge (or rhombus)-shaped sheet of paper, three edges were pasted together but there was no gummed opening, sealing wax was still required to close it. The envelope we know today did not appear until nearly 50 years later.

And now even the envelope has largely disappeared.

Who writes love letters to today I wonder?

Where is the romance in a text or email?