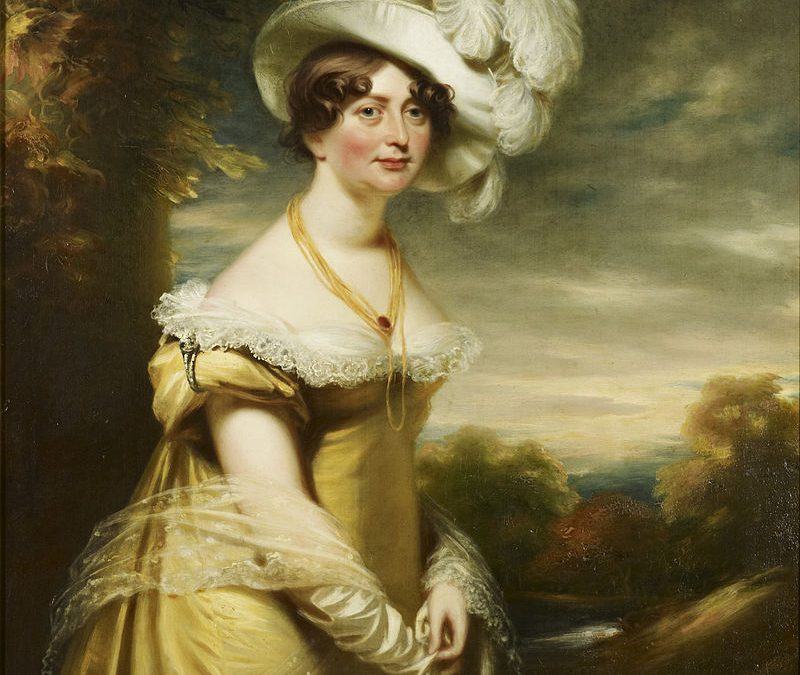 As the daughter of a king Princess Augusta was denied access to men of her own rank except those in her immediate family for most of her life. Like several of George III’s daughters she found herself lonely and drawn into romances with gentleman at court whether they were suitable or not.

It is believed that Princess Augusta first met Sir Brent Spencer, an Irish general in the British Army, around 1800. Augusta later told her brother, the future George IV, the two entered into a relationship in 1803 while Spencer was stationed in Britain. Although the couple conducted their relationship with the utmost privacy, Augusta did petition the Prince Regent in 1812 to be allowed her to marry Spencer, promising further discretion in their behaviour. While no official record of a marriage between the two exists, it was noted at the court of Hesse-Homburg at the time of her sister Elizabeth’s marriage in 1818 that Augusta was “privately married.”

Princess Augusta Sophia was born at Buckingham House, London, the sixth child and second daughter of George III (1738–1820) and his wife Queen Charlotte. The young princess was christened on 6 December 1768, by Frederick Cornwallis, The Archbishop of Canterbury, in the Great Council Chamber at St. James’s Palace. Princess Augusta had an older sister Charlotte (born 1766) and her younger sister Elizabeth (born 1770). In 1771, the two oldest princesses started travelling to Kew to take lessons under the supervision of Lady Charlotte Finch and Miss Planta. The pair, who had formerly been very close to their older brothers now saw little of them, except when their paths crossed on daily walks. In 1774, Martha Goldsworthy, or “Gouly” was put in charge of their education which included the feminine pursuits of deportment, music, dancing, and the arts. Their mother also ensured that they learned English, French, German, and Geography.

In 1782, aged 14, Augusta made her court debut on the occasion of her father’s birthday. Being terrified of crowds; the princess was painfully shy, and stammered when in front of people she didn’t know; her mother gave her only two days notice of the event. That year she lost her two baby brothers, Prince Alfred and Prince Octavius. Alfred had a bad reaction to his inoculation against smallpox and died aged nearly two. Six months after Alfred’s death, her younger brother Octavius and her sister Sophia were taken to Kew Palace in London to be inoculated with the smallpox virus. (This may seem irresponsible today but smallpox was virulent and no respecter of rank so inoculation, even with its risks was still probably a better bet than not being inoculated at all.) Sophia recovered without incident, but like his brother, before him, Octavius became ill and died several days later, he was just four years old. As was traditional at the time, the household did not go into mourning for the deaths of royal children under the age of fourteen but Augusta, who had loved the children dearly, was distraught.

Her formal education now came to an end. Now her duty was to join her elder sister and her parents at court and accompany them to the theatre and the Opera. With six daughters to clothe and educate the royal budget was stretched. The royal princesses often appeared in what was basically the same dress each in a different colour to save money and at home, they wore plain, everyday clothes unlike their royal contemporaries in Europe.

By 1785, Augusta and Charlotte were reaching an age where they could be considered as potential brides for foreign princes. In that year the Crown Prince of Denmark (later King Frederick VI) indicated to her father that he was interested in Augusta but George decided he could not allow his lovely daughter to go to Denmark after his sister’s disastrous marriage to King Christian VII. As their friends at court found husbands the sisters began to wonder when their turn would come. Their father it seems was reluctant to see them leave and the subject was not one for discussion in case it disturbed the often addled mind of their sick father. So, the years slid by with neither of them married. This was when pretty Augusta made her own arrangements with the dashing officer, Brent Spencer.

Spencer was upper middle class not royal; he became a commissioned officer in 1778 and fought with great credit in the West Indies in 1779–1782 during the American Revolutionary War and again in 1790–1794 during the War of the First Coalition. He was a professional soldier who rose through the ranks, first to Brigadier General, serving in the wars against Napoleon in Europe and Egypt. He was eight years older than Augusta and served with Wellington as his second in command during the Peninsular War where he became a full General. After the war, he became the MP for Sligo.

Such a match would be considered wholly acceptable today but not in the 18th century. It is said that he and Augusta maintained their relationship through these years of separation and that he died with a picture of her in his hand at the age of 68. Augusta died on 22 September 1840 at Clarence House, aged 71.

Source: Wikipedia. Illustration: Augusta Sophia of the United Kingdom. Copy of the portrait exhibited at the Royal Academy in 1819 and now in the Museum of Fine Arts, Baltimore.