Princess Blackmailed by Her Illegitimate Son 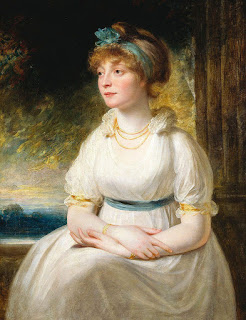 Sophia was an unworldly and shy woman who was seduced by a man 33 years her senior. She gave birth to his illegitimate child who grew up to blackmail her to pay his father’s debts.

According to her biographer Christopher Hibbert, in her young adulthood Princess Sophia, the 5th daughter of King George III, was a “delightful though moody girl, pretty, delicate and passionate.” She was devoted to her father, though she occasionally found him exasperating. She wrote that “the dear King is all kindness to me, and I cannot say how grateful I feel for it.”

The King had told Sophia he would take her and her sisters to Hanover and find them suitable husbands. Her father intended to be circumspect in his choice of his children’s spouses because he was well aware of his own sisters’ marriage experience.

His eldest sister, Augusta had never fully adapted to life in Brunswick after her marriage to Charles William Ferdinand Prince of Brunswick-Wolfenbüttel despite her marriage settlement of £80,000 from the British government. Her husband took two mistresses; Maria Antonia von Branconi and Luise von Hertefeld. Augusta was never comfortable in Hanover and her German relatives were not keen on her. Her situation was made worse by the fact that her eldest sons were born with disabilities.

Augusta’s fate was unpleasant but not as bad as his other sister Caroline’s fate. Caroline had suffered a far worse. At the age of 15, she was married to her cousin, Christian VII of Denmark in 1766. A year later her husband abandoned her for his mistress Støvlet-Cathrine publicly declaring that he could not love Caroline because it was “unfashionable to love one’s wife”. Caroline was left neglected and unhappy as her young husband sank into a mental stupor of paranoia, self-mutilation, and hallucinations. Caroline took comfort with her husband’s doctor, Johann Friedrich Struensee, an Enlightenment man who ran Denmark with the half-crazed King introducing widespread reforms.

The affair between Caroline and Struensee resulted in Caroline giving birth to his child, her divorce, and Struensee’s execution in 1772. Caroline retained her title but not her children, eventually, she left Denmark and passed her remaining days in exile at Celle Castle in Hanover. She died there of scarlet fever on 10 May 1775, at the age of 23.

The Purple Light of Love

George was unable to keep his promise due to his own ill health. He had however arranged a dowery and allowance of £6,000 a year for her with Parliament. This should have made her an attractive match but Sophia was shy and she ruined what prospects she had when she met and fell in love with one of her father’s equerries, Colonel, Thomas Garth, a man thirty-three years her senior. Garth had a large purple birthmark on his face, causing Sophia’s sister Mary to refer to him as “the purple light of love.” Courtier and diarist Charles Greville, on the other hand, described him as a “hideous old devil.” One of her ladies-in-waiting wrote “The princess was so violently in love with him that everyone saw it. She could not contain herself in his presence.”

Dorothy Margaret Stuart, in her book The Daughters of George III, reports the claim of the Corry family that Sophia Princess had secretly married Issac Corry, Groom of the Bedchamber to the Duke of Cumberland. Corry was a barrister and later became Chancellor of the Irish Exchequer. His family claim that he and Sophia had three children together but there is no real evidence to support such an idea. What we can be sure of is that Sophia never married and remained at court until her mother Queen Charlotte died. After the queen’s death, Sophia lived in Kensington Palace next to her niece Princess Victoria of Kent, the future Queen Victoria. Like her sister-in-law the Duchess of Kent, Sophia fell under the spell of Victoria’s comptroller Sir John Conroy and let him manage her money. The lonely and unworldly Sophia fell under Conroy’s spell too and he used her affection to rob her of most of her money.

Her son, Tommy Garth of the 15th Hussars (1800-1873), learned of his true heritage when his father thought he was on his deathbed in 1828. With the family deep in debt, he tried to blackmail the royal family with evidence of his mother’s true identity. As historian Flora Fraser writes, ‘all parties played unfairly’. The royal family offered young Garth £3,000 for his box of evidence. They took the box but did not pay him so he went to the papers. The press dug up the gossip concerning the possibility of the Duke of Cumberland, her uncle, being his true father making the latter part of Sophia’s life very difficult.

Charles Greville summed Sophia up with he wrote in his diary in May 1848, shortly after she died: “Princess Sophia died a few days ago, while the Queen [Victoria] was holding the Drawing-room for her Birthday. She [Sophia] was blind, helpless, and suffered martyrdom; a very clever, well-informed woman, but [one] who never lived in the world.”