The Man Who Took the Knife to London’s High Society 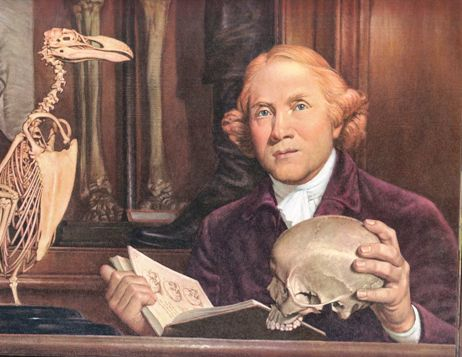 By the 1780s John Hunter was the leading anatomist in Europe and an influential figure in Georgian high society: he had married a beautiful bluestocking poet, Anne Home, and was surgeon extraordinary to King George III.

During the day, the carriages of his wealthy patients blocked Leicester Square, where he lived with his family. In the evening, while Anne entertained London’s literati (“literary debates were decidedly not his idea of fun”), the Resurrectionists, or “Sack ‘Em Up Men”, would deliver corpses from London’s cemeteries to his back door. He was, as historian Wendy Moore says, “the Jekyll and Hyde of the Georgian period”.

At his country house in the “tranquil village” of Earl’s Court, Hunter kept an exotic menagerie: zebras and mountain goats grazed on the front lawn, prompting some to say he was the model for Dr. Dolittle. Hunter would sometimes be seen driving a carriage containing fresh supplies of fruit and vegetables from Earl’s Court to his Leicester Square townhouse, pulled by three Asian buffaloes. On the return journey, it would carry a gory cargo of dissected corpses. It was at Earl’s Court, he conducted experiments on animals of which Dr. Moreau would have been proud. The squealing of pigs and dogs vivisected in the name of science competed with the roar of his lions. In one of his more bizzare experiments he successfully grafted a cockerel’s testicle into the belly of a hen.

The place in British society of a man like John Hunter was rich in contradictions. As a surgeon, he treated some of the prominent men of his age – men like Adam Smith and David Hume (who called him “the greatest anatomist in Europe”), Gainsborough, Hickey, and the baby Byron, possibly James Boswell too. Many of these and other celebrities were personal friends of his and Anne’s – men like Joseph Banks, Joshua Reynolds, and Daniel Solander – highly respected members of civilised society.

Hunter kept a careful record of his surgical operations. This extract from his notebook details an unfortunate patient’s neck tumour:

‘John Burley, a Rigger, thirty-seven years of age, of a middle size, dark complexion, and healthy constitution; about sixteen years ago, fell down, & bruised his cheek on the left side, above the parotid gland. It was attended with a good deal of pain, which in four or five weeks went off, and the part began to swell gradually, and continued increasing for four or five years, attended but with little pain. At this time it was increased to the size of a common head, attended with no other inconvenience than its size and weight. He again fell and received a wound on its side, which gave considerable pain at first, but it got well in eight or nine weeks (This part is marked in the Drawing.) After this, the tumour increased without pain, on the lower part; as also at the basis, extending itself under the chin to the amazing size it now appears. Lately, he had perceived that its increase is much greater than what it was some time ago: he says he can perceive it bigger every month. The tumour is in parts the colour of the Skin, in other parts of a shining purple, where the Skin of the cheek is elongated. The beard grows upon it and is shaved in common. When by accident it is wounded, it heals kindly, because it is only the Skin that is wounded; and has sensation in common with the skin. It is hard to the feel some places, and in others softer, as if containing a fluid. It seems quite loose and unconnected with the skull or lower jaw and may be moved easily without giving Pain.’

Hunter performed the operation to remove this monster of a tumour on Monday, October the 24th, 1785. It lasted twenty-five minutes, and the man did not cry out during the whole of the operation. The Tumour weighed 144 ounces.

John Hunter died on October 16, 1793, after yet another heated argument with the out-dated surgeons at St George’s Hospital. He left huge debts, having spent all his money building up his unique anatomical collection which was opened to the public in 1788 at his Leicester Square home. The 14,000 items collected over 40 years – including Burley’s immense tumour – demonstrated the interrelatedness of all life on Earth. It also proved the originality of Hunter’s thinking. Seventy years before Darwin’s On the Origin of Species, monkey and human skulls were placed together in a series, and he told visitors that “our first parents, Adam and Eve, were indisputably black”.

He had hoped the nation would buy his collection, but William Pitt the Younger exclaimed: “What! Buy preparations! Why I have not got money enough to purchase gunpowder.” Hunter’s wife and children were left with nothing. His brother-in-law seized his unpublished works and plagiarised them ruthlessly to carve out a career for himself as a surgeon. The man whom Hunter had taught the art of anatomy then burnt his priceless research notes.

I gave the eponymous hero of my latest novel, Sinclair, a brush with Hunter at St Georges Hospital. Here are a few of Sinclair’s thoughts on London voluntary hospitals.

“I’ll have to look for a position at one of the voluntary hospitals. I was hoping that I’d never had to go into one of those sanctimonious places again. It’s not the patients that get me down, they can’t help being sick or poor, it’s all the praying and grovelling. Those hospitals are full of the most unpleasant people, Frank. Pompous and incompetent men, self-satisfied arrivistes and simpering clergymen.”

“Oh, life’s full of grovelling and doing what somebody else wants, in my experience. Just try being in the Army.”

“I know it has to be done from time to time, but I’m not good at it. Those poor patients have to pray for their souls and give thanks to their benefactors at least three times a day no matter how sick they are. A lot of them are at death’s door, but they still have to get on their knees and give thanks to God and their wealthy benefactors.”

“But it’s better than being left to die alone and without any care, isn’t it?” said Greenwood.

“Aye, I suppose when you put it like that it’s a small price to pay for a warm bed, medicine and a bowl of broth, but it sticks in my craw. Why should these people be grateful for so little when the undeserving seem to have so much? Besides, this so-called charity work is false. It’s the very thing that enables surgeons like Hunter to build their reputations and make fortunes in the City.”

“Because staff appointments aren’t made on merit, they’re made through connection and patronage, and I won’t prostitute myself for these corrupt men of money. I put my principles aside to join the East India Company. I thought I could make myself happy by getting rich in the colonies, but thankfully I was saved from that folly. I now realise a man must be happy with his conscience if he’s to be happy at all.”

“That’s the trouble with principles; they’re very expensive for a poor man. Most of my father’s friends, who are rich of course, claim to have principles, but somehow they make sure that they never have any that stop them making money or for which they cannot get others to pay.”

“I think you’re an even greater cynic than me, Frank.”

“Oh, that’s quite possible. My whole life has been spent in the company of politicians: I don’t need the newspapers to know how they think.”

Source: The Knife Man: The Extraordinary Life and Times of John Hunter, Father of Modern Surgery by Wendy Moore