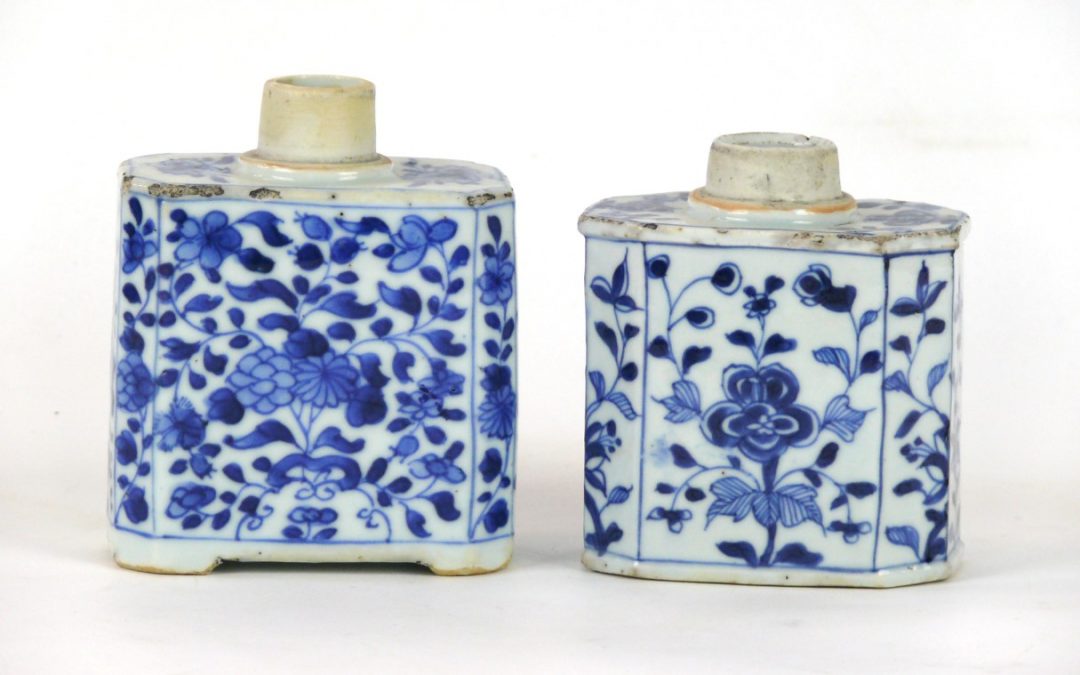 The craze for porcelain was not orchestrated – it was a by-product of another craze; the craze for drinking tea and to a lesser extent coffee. As tea drinking really took hold the East India Company’s imports rocketed. By 1750 around four million pounds of tea were being imported to Britain and the porcelain was used to pack around the tea chests as it added ballast to ships without tainting the flavour of the precious cargoes. Over half a million pieces were brought to London in 1713 and soon this affordable tableware, plain white or blue and white was an essentially middle-class item.

From the first journeys east in the 1600s the elites of Europe had indulged their passion for porcelain and tea. Queen Mary of Orange was an avid collector and spread the fashion when she came to Britain with her husband William in 1688, the Swedish architect Nicodemus Tessin described the Princess’s country estate of Honselaersdyck (not far from the Hague), as “very richly furnished with Chinese work and pictures”. An inventory of her apartment at Kensington Palace in 1697 listed 7,800 porcelain items – figures, jars, porcelain dishes, plates, and cups.

The royal craze soon spread through the upper echelons of English society as can be seen in the inventories of the Antonie family at their estate at Colworth House in Bedfordshire. An inventory drawn up for a sale following the death of Marc Antonie in 1720 lists “cheany & Teatable” in the North Parlour, advertised for £ 6 14s, and in the Hall “10 little Cheany plates that sold for £ 1 5s, 6 large Cheany Dishes £ 1 15s, 4 Cheany Basons, Cheany mugs and Delf Dishes, Cheany Cassters and Cheany”. 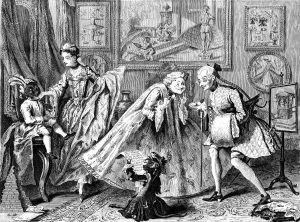 Taste in the High Life

Contrary to the popular literature of the day that the passion for porcelain was almost entirely female men collected it too. Indeed William Hogarth’s satirical painting ‘Taste in High Life’, shows amongst many other things considered fashionable at the time a couple fawning over a china cup and saucer.

These exotic treasures from the east brought their owners connection with the wider world, a world most of them would never see, and probably gave them the thrill of owning and using something that had been bought so unimaginably far away.

In William Burnaby’s The Ladies’ Visiting Day dated 1701, the female character Lady Lovetoy laments over the impossibility of travel to the East for women and the purchase of exotic goods is presented as a replacement for the voyages she could not make, unlike one supposes the men she might have might have known:

Fulvia: I wonder your Ladyship, that has such a Passion for those Parts of the World, never had the Curiosity to see ‘em.
Lady Lovetoy: Alas! The Men have usurp’d all the Pleasures of Life, and made it not so decent for our Sex to Travel; but I manage it as Mahomet wou’d ha’ done his Mountain […] Every Morning the pretty Things of all these Countries are brought me, and I’m in love with every Thing I see.”

Between 1660 and 1689, tea sold in coffee houses was taxed in liquid form. Unbelievably, all the tea for the day would be brewed in the morning, taxed by a visiting excise officer, and then kept in barrels and reheated as necessary throughout the day, which is a truly horrific thought for a tea drinker today. The quality of the drink improved after 1689, when it was taxed in leaf form rather than as a liquid and people started to brew it at home.

Smuggling tea became an unofficial industry along the south coast of England with a brisk trade in illegal tea from English merchants based in France until 1785 when the government (under pressure from London tea merchants whose profits were being seriously undermined) slashed the duty making it not only cheaper for customers but also wiping out the illegal trade overnight. 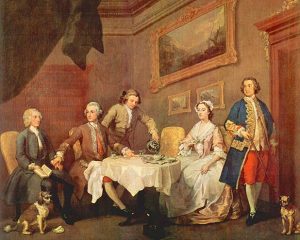 So while men tended to haunt the coffee houses, smoking, reading the newspapers and doing business their female relatives were at home brewing and drinking tea. All the equipment would be set up by the servants, and then the tea would be brewed by the hostess (aided by a servant on hand to bring hot water) and then served by her to her guests in dainty cups. Both green and black teas were popular, and sugar was frequently added but not milk.

William Hogarth’s painting, ‘The Strode Family’ depicts the wealthy city magnate William Strode seated at the tea table with his aristocratic wife Lady Anne Cecil, inviting Reverend Arthur Smith to quit his solitary reading to join the conversation over tea while the empty seat awaits Colonel Strode to complete the party. The effect of the tea table with its combination of tea and porcelain was to bring about a mini social revolution in Britain.

This afternoon break with refreshments was considered a good thing for the rich and middle classes but some commentators of the day set themselves against it for the lower orders as it would lower their productivity. Despite their protestations not only was teatime invented so was the workers tea-break! 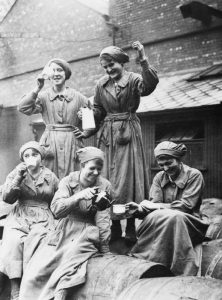 I think it’s time for a cuppa after all this writing!