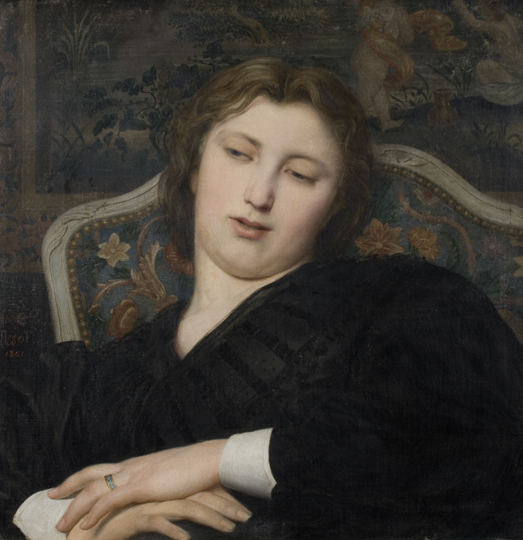 From 1846 to 1854, Gustave Flaubert, the creator of Madame Bovary, had a relationship with the poet Louise Colet. The relationship turned sour, however, and they broke up. Louise was allegedly so angered by her breakup with Flaubert, she wrote a novel, Lui,(Him) in an effort to target Flaubert. However, Colet’s book has failed to have the lasting significance of Madame Bovary. Flaubert’s dozens of long letters to her, in 1846–1847, then especially between 1851 and 1855, are one of the many joys of his correspondence. Many of them are a precious source of information on the progress of the writing of Madame Bovary. In many others, Flaubert gives lengthy appreciations and critical comments on the poems that Louise Colet sent to him for his judgement before offering them for publication. The most interesting of these comments show the vast differences between her and him on the matter of style and literary expression, she being a gushing Romanticist, he deeply convinced that the writer must abstain from gush and self-indulgence.

An extract from one of the letters is reproduced below. Flaubert never married and according to his biographer Émile Faguet, his affair with Louise Colet was his only serious romance. Flaubert believed in, and pursued, the principle of finding “le mot juste” (“the right word”), which he considered as the key means to achieve quality in literary art. Does he find ‘le mot juste’ in this letter dated 1846?

“I will cover you with love when next I see you, with caresses, with ecstasy. I want to gorge you [sic] with all the joys of the flesh, so that you faint and die. I want you to be amazed by me, and to confess to yourself that you had never even dreamed of such transports… When you are old, I want you to recall those few hours, I want your dry bones to quiver with joy when you think of them.”

In his novel he Flaubert gives expression to his thoughts on love to Emma;

“Before her marriage she had thought that she had love within her grasp; but since the happiness which she had expected this love to bring her hadn’t come, she supposed she must have been mistaken. And Emma tried to imagine just what was meant, in life, by the words “bliss,” “passion,” and “rapture” – words that had seemed so beautiful to her in books.”

“She was not happy–she never had been. Whence came this insufficiency in life–this instantaneous turning to decay of everything on which she leaned? But if there were somewhere a being strong and beautiful, a valiant nature, full at once of exaltation and refinement, a poet’s heart in an angel’s form, a lyre with sounding chords ringing out elegiac epithalamia to heaven, why, perchance, should she not find him? Ah! How impossible! Besides, nothing was worth the trouble of seeking it; everything was a lie. Every smile hid a yawn of boredom, every joy a curse, all pleasure satiety, and the sweetest kisses left upon your lips only the unattainable desire for a greater delight.”

In choosing to lose his heart to Louise Colet Flaubert had chosen badly. In her twenties she married Hippolyte Colet, an academic musician, partly in order to escape provincial life and live in Paris, echoes of Emma Bovary here I’m sure. When the couple arrived in Paris, Colet began to submit her work for approval and publication and soon won a two-thousand-franc prize from the Académie française, the first of four prizes won from the Académie. Like many women of note she ran a salon that was frequented by many of the city’s literary crowd including Victor Hugo. In 1840 she gave birth to her daughter Henriette, but neither her husband nor her lover, Victor Cousin, would acknowledge paternity of the child. After her affair with Flaubert she took up with Alfred de Musset, then Abel Villemain.

She was a resourceful woman and after her husband died, she supported herself and her daughter with her writing. Her “dry bones” probably did not quiver when she thought about Flaubert in her old age, far more water passed under her bridge than it ever did under Flaubert’s.