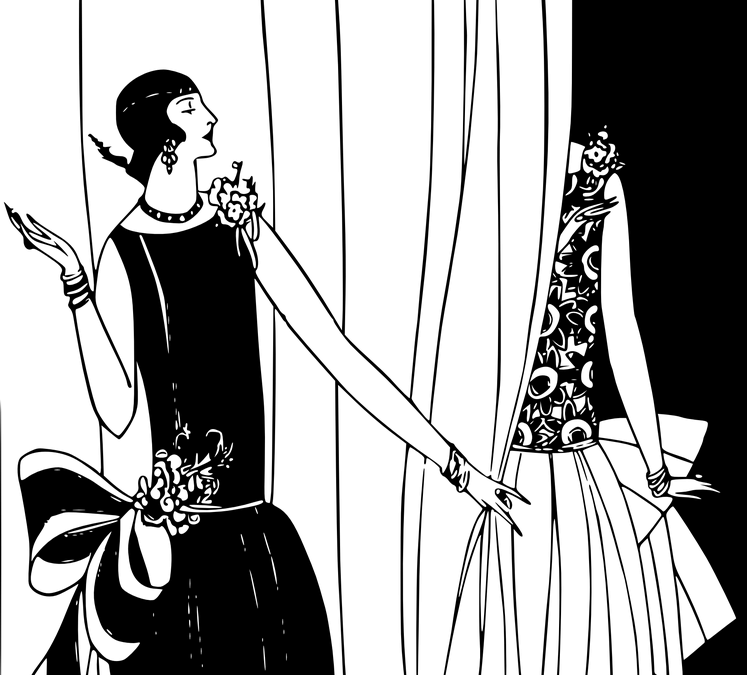 The origins of Haute Couture are English!  Charles Frederick Worth established the first haute couture house in Paris in 1858, championing exclusive luxury fashion for the upper-class woman and coining the term ‘fashion designer’ and upgrading himself from a basic dressmaker. Ten years later Le Chambre Syndicale de la Haute Couture was first established as the safeguard of high-fashion. Designers were required to earn the right to label themselves a couture house according to certain specifications although at the time the requirements were rather vague but being male was certainly an essential part of the package

The phrase “haute couture” was used for the first time in 1908 and shortly afterward, in 1910, Gabrielle Chanel set up her milliner’s studio at 21 rue Cambon in Paris, and in 1913 she opened a boutique in Deauville devoted to hats and a small range of clothes, made predominantly from jersey. In 1915 she reached new heights when she opened her Maison de Couture in Biarritz, in the Villa Larralde just opposite the Casino.

From the gamine fashions of the 1920s, Coco Chanel progressed to the womanly fashions in the 1930s: evening-dress designs were characterised by an elongated feminine style, and summer dresses featured contrasts such as silver eyelets, and shoulder straps decorated with rhinestones – drawing from Renaissance style. In 1932, Chanel presented an exhibition of jewellery dedicated to the diamond as a fashion accessory; it featured the Comet and Fountain necklaces of diamonds, which were of such original design, that Chanel S.A. re-presented them in 1993. Moreover, by 1937, the House of Chanel had expanded the range of its clothes to more women and presented prêt-à-porter clothes designed and cut for the petite woman. Among fashion designers, only the clothes created by Elsa Schiaparelli could compete with the clothes of Chanel.  Schiaparelli’s designs were heavily influenced by Surrealists like her collaborators Salvador Dalí and Jean Cocteau. Her clients included the heiress Daisy Fellowes and actress Mae West. Schiaparelli did not adapt to the changes in fashion following World War II and her couture house closed in 1954. Her brand has recently been revived led by designer Bertrand Guyon.

It is now over a hundred years since Coco Channel challenged convention, the key feature of today’s fashion is gender neutrality but there is nothing neutral about who’s in charge in these bastions of fashion and wealth. “Who’s Who in Fashion,” a directory published by Fairchild Publications, is split 60-40 in favor of men, and “The Encyclopaedia of Clothing and Fashion,” published last year by Charles Scribner’s Sons, included entries on 36 female and 69 male designers. There is still a glass ceiling for women when it comes to the fashion industry.

With two films and several books about her life and legacy, Coco Chanel has become a style icon. In the 1920’s and 30’s, there were many female designers — Alix Grès, Elsa Schiaparelli and Chanel — but after World War II, the big names were male — Bill Blass, Yves Saint Laurent and Pierre Cardin even though the number of women entering the profession is more than ten to one in favour of the girls they are not making the progress they should.

Karl Lagerfeld has been the artistic director of the House of Chanel since 1983. He said of the brand founder,” Coco did a lot, but not as much as people think – or as much she herself taught at the end of her career.  She wasn’t only a designer – she was a woman of her time.’ He said didn’t like women and that she made two great mistakes towards the end of her long career; that she believed men did not like to see women in miniskirts and she took against blue jeans.

Coco Chanel was certainly a talented and controversial character, she spent the Second World War in bed with Baron Hans Günther von Dincklagea at the Hotel Ritz. In 1939, she took revenge on her staff who had struck for fairer wages in 1936 by closing her shops making 4000 of her mainly female staff redundant and she was well known for her dislike of Jews believing them to be a threat to Europe because of the Bolshevik government in the Soviet Union. I would say that not taking the blue jeans was the least of her mistakes.