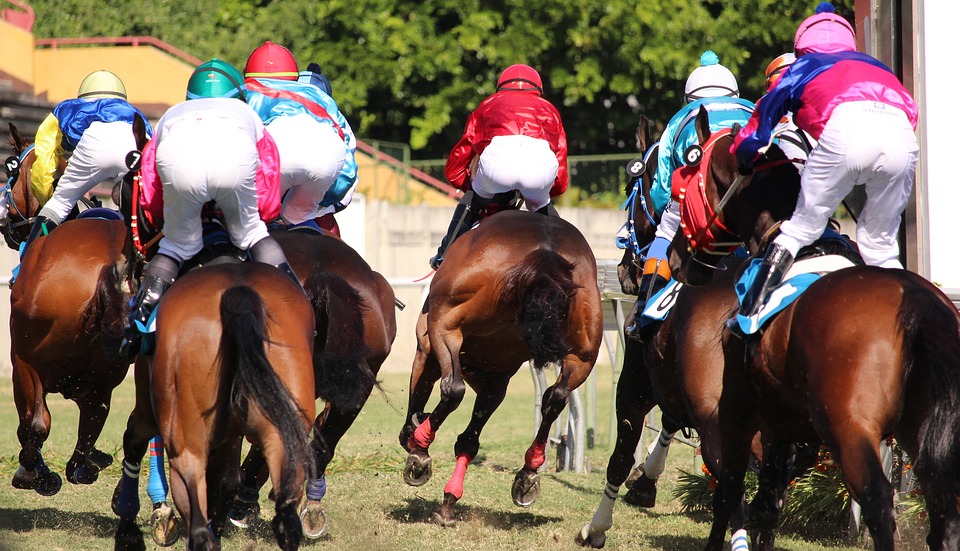 Ascot Racecourse pronounced /ˈæskət/, by those in the know is close to Windsor Castle and is the Queen of England’s favourite racecourse. The most famous and prestigious race is The Gold Cup.

Ascot Racecourse was founded in 1711 by Queen Anne. The first race, “Her Majesty’s Plate”, had a purse of 100 guineas, was held on 11 August 1711. Seven horses competed, each carrying a weight of 12 stones (76 kg). This first race comprised three separate four-mile (6437 m) heats. It’s changed a lot since then.

Every year Royal Ascot is attended by Elizabeth II and other members of the British Royal Family such as The Prince of Wales, arriving each day in a horse-drawn carriage with the Royal procession taking place at the start of each race day and the raising of the Queen’s Royal Standard. It is a major event in the British social calendar, and press coverage of the attendees and what they are wearing often exceeds coverage of the actual racing. There are three enclosures attended by guests on Royal Ascot week.

The Royal Enclosure is the most prestigious of the three enclosures, with recent visits from the Queen and Royal Family members. Access to the Royal Enclosure is restricted, with high security on the day. First-time applicants must apply to the Royal Enclosure Office and gain membership from someone who has attended the enclosure for at least four years. Those in the Royal Enclosure have the options of fine dining and hospitality, and a selection of bars. The dress code is strictly enforced. For women, only a day dress with a hat is acceptable, with rules applying to the length and style of the dress. In addition, women must not show bare midriffs or shoulders. For men, black or grey morning dress with top hat is required.

Over 300,000 people make the annual visit to Berkshire during Royal Ascot week, making this Europe’s best-attended race meeting. There are eighteen group races on offer, with at least one Group One event on each of the five days. The Gold Cup is on Ladies’ Day on the Thursday of the meet, hats are the order of the day – the more outrageous the better.

In 2012, the Golden Jubilee Stakes was renamed the Diamond Jubilee Stakes, to commemorate Queen Elizabeth II’s Diamond Jubilee. In 2013, the Windsor Forest Stakes was renamed the Duke of Cambridge Stakes, with the Queen’s consent, recognising the new title given to Prince William; in 2015, the newly created Commonwealth Cup became the eighth Group One race at Royal Ascot, replacing the Buckingham Palace Stakes. In 2016, total prize money across the five days of Royal Ascot was £6,580,000. This year the prize money is expected to be higher. Races with notable prize money increases for 2016 included the Prince of Wales’s Stakes (£750,000 from £525,000), the Queen Anne Stakes (£600,000 from £375,000) and the Diamond Jubilee Stakes (£600,000 from £525,000), while the other Group One races all had their prize money increased to £400,000. The Gold Cup in 2016 was run as “The Gold Cup in Honour of The Queen’s 90th Birthday”.

Ascot racecourse closed for a period of twenty months on 26 September 2004, for a £185 million redevelopment funded by Allied Irish Bank and designed by Populous and Buro Happold. As the owner of the Ascot estate, Her Majesty Queen Elizabeth reopened the racecourse on Tuesday 20 June 2006. Upon re-opening the new grandstand attracted criticism for failing to provide sufficiently raised viewing for patrons to watch the racing, and devoting too much space to restaurants, bars, and corporate hospitality facilities. At the end of 2006, a £10 million programme of further alterations was announced to improve the viewing from lower levels of the grandstand.

Julia Herdman writes historical fiction. Sinclair is a second chance romance set in Georgian London and Yorkshire with horse racing and doctors that puts women to the fore. Available on Amazon – in Paperback and o Kindle. Also available on: