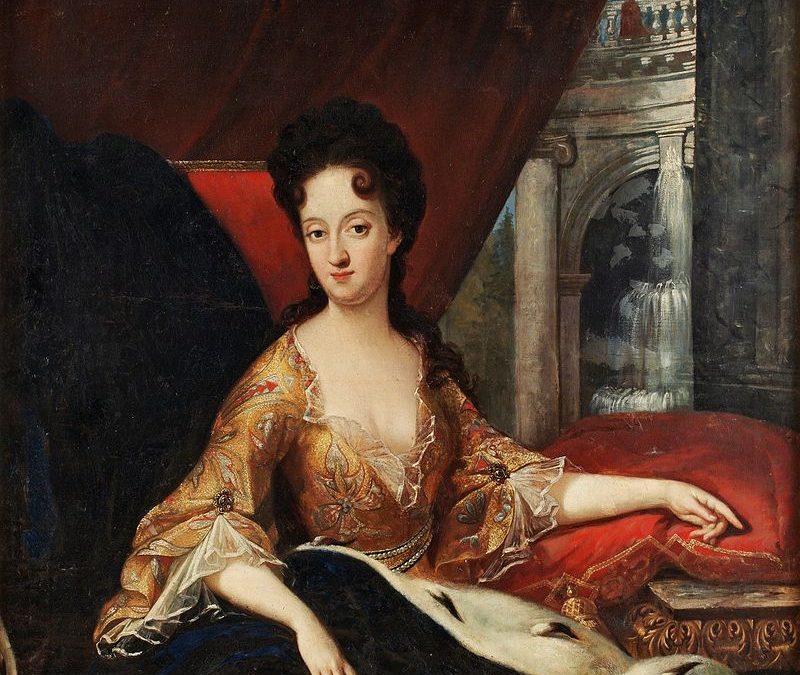 Queen Ulrika Eleonora the Younger (1688 – 1741), was Queen regnant of Sweden from 5 December 1718 to 29 February 1720, and then Queen consort until her death in 1741. She was the youngest child of King Charles XI and Ulrika Eleonora of Denmark. She had an elder brother and sister so never expected to be queen.

Her mother died in 1693 when she was five and little Ulrika and her elder sister, Princess Hedvig Sophia, were set off to be brought up by their grandmother, Hedwig Eleonora at Karlberg Palace. Grandmother was a consummate operator, she was the guiding light in her husband’s administration and she dominated her son so much that he referred to her as the Queen ignoring his wife. Her grandmother described Ulrika as a stubborn little girl who would pretend to be ill when it came to doing things she didn’t like riding and dancing. It seems little Ulrika was not the physical type but she was a talented musician, and when performing with her sister at court concerts, she would play the clavier while her sister sang. Although she was friendly, modest and dignified, with good posture and beautiful hands she was regarded as neither intelligent nor attractive and no match for her older sister.

Her father died in 1697 when Ulrika was 9 years old and the crown passed to her brother Charles XII (1682 –1718). Grandmother was sure he was too young to take on full royal responsibilities, he was only 15, and petitioned to act has his regent; a caretaker government was put in place which lasted for seven months then Charles took full command. Charles was an absolutist monarch; he believed he had been put in charge by God, an idea that was already encountering quite a bit of resistance in Europe at the time. He was, however, a successful war leader and achieve considerable success in defending Sweden in the Great Northern War.

On 12 May 1698, Princess Hedwig Sophia married her cousin, Frederick IV, Duke of Holstein-Gottorp. Her marriage was arranged as a part of the traditional Swedish policy of alliance with Holstein-Gottorp against Denmark. The marriage took place against her consent and she was not happy; Frederick IV had a string of mistresses and whores he preferred over his reluctant wife. Hedwig Sophia was a widow with a young son by 1702 but Ulrika was still unmarried. Hedwig Sophia returned to the Swedish court where she was the centre of attention, partying with her brother the king and lauded for her beauty and fashion sense. She was known as the “The Happy Princess” unlike her stubborn little mouse of a sister. Unfortunately, Hedwig Sophia caught smallpox in 1708 nursing her son who also had the disease. Hedwig Sophia died but her son survived.

With no marriage in prospect for her brother the king in sight Ulrika’s position suddenly changed with her sister’s death. In 1710, she received a marriage proposal from Prince Frederick of Hesse, he was a widower with an eye on her crown. The marriage was supported by her grandmother because it would force Ulrika to leave Sweden and so increased the chance of her favourite granddaughter’s son becoming king when Charles died. Although her prospective husband liked the idea of inheriting her crown his advisers were telling him that Ulrika was no great catch describing her as imperious, haughty, and suffering from bad breath and a weak bladder. Their engagement was announced four years later on 23 January 1714, and the wedding took place on 24 March 1715. During the wedding, her brother Charles XII remarked: “Tonight my sister is dancing away the crown”. But it turned out she wasn’t. When a musket ball went clean through her brother’s head in 1718 the Swedish nobles opposed to the war which had been waging for nearly two decades seized their chance and offered Ulrika the throne on the condition that she accepted a modern constitution for the country. She accepted but years of living as an autocrat made accepting what was required of her very difficult so she abdicated giving her crown to her husband who did the deed for her and Sweden took its first steps into the modern age. All of which goes to show that you don’t have to be clever, or beautiful to make history you just have to seize the opportunities life throws at you and do the right thing.

Julia Herdman writes historical fiction that puts women to the fore. Her latest book Sinclair, Tales of Tooley Street Vol. 1. is  Available on Amazon – Paperback and on Kindle. Also available on: