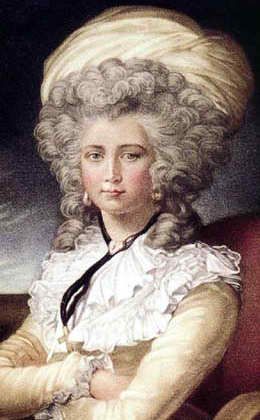 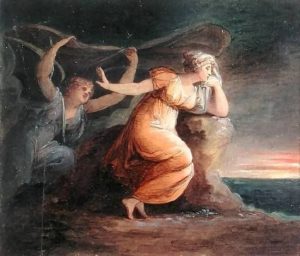 Maria Cosway was born Luisa Caterina Cecilia Hadfield was born on 11 June 1760 in Florence, Italy to Charles Hadfield, who was a native of Shrewsbury, England, and an Italian mother.

Her father was a successful innkeeper at Livorno, where he had become very wealthy. The Hadfields operated three inns in Tuscany, all frequented by British aristocrats taking the Grand Tour.

One of eight children Maria was born into a comfortable and happy family. Her life should have been a tranquil one. Unbeknown to the family tragedy would overtake them when four of the Hadfield children were killed by their  mentally ill nursemaid who claimed she was sending the children to heaven. Luckily she was caught and imprisoned before she could kill Maria.

While still in Florence, Maria Hadfield  studied art and painting under Violante Cerroti and Johann Zoffany.

The Florentine Violante Beatrice Siries (1709–1783) was an Italian painter of repute. She studied under Hyacinthe Rigaud and François Boucher in Paris from 1726. When she returned to Florence she married Giuseppe Cerroti. She was talented in several genres, but established herself as a famous portraitist She gained the patronage of the Medici family in 1731 and travelled to Rome and Vienna to paint various members of the family .Her most ambitious work was a fourteen figure family group of the emperor Charles VI, the father of the Austrian Empress Maria Theresa in 1735. Three of her self-portraits are preserved in the Uffizi Gallery.

Johann Zoffany (1733 -1810) was a German neoclassical painter, active mainly in England, Italy and India. His works appear in many prominent British collections such as the National Gallery, London, the Tate Gallery and in the Royal Collection, as well as institutions in Europe, India, the United States and Australia.  While Zoffany was painting The Tribuna of the Uffizi  in 1773 Hadfield copied Old Masters at the Uffizi Gallery. She continued copying for another five years and experimenting until 1778 when she was elected to the Academia del Disegno in Florence in 1778. She also went to Rome, where she studied art under Pompeo Batoni, Anton Raphael Mengs, Henry Fuseli, and Joseph Wright of Derby. 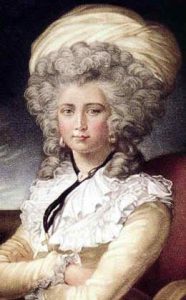 Self Portrait With Arms Folded

On 18 January 1781, Maria Hadfield married a fellow artist, the celebrated miniature portrait painter Richard Cosway, in what is thought to have been a marriage of convenience.

Richard was born in Tiverton, Devon, the son of a schoolmaster. He was initially educated at Blundell’s School but at the age of twelve he was allowed to travel to London to take lessons in painting. He won a prize from the Society of Artists in 1754 and by 1760 had established his own business. He exhibited his first works at the age of 20 in 1762 and was soon in demand.

Maria’s husband was one of the first group of associate members of the Royal Academy, elected in August 1770, and was elected a full member the following March, on the casting vote of the academy’s president, Sir Joshua Reynolds.  He was 20 years Maria’s senior, known as a libertine, and was repeatedly unfaithful to her.

Richard Cosway was “commonly described as resembling a monkey.” Her Italian manners were so foreign that her husband kept Maria secluded until she fully mastered the English language. Cosway also forbade his wife from painting, possibly out of fear of the gossip which surrounded women painters.

Her Self-Portrait with Arms Folded is seen as a response his command. The reprobate Cosway, realised his wife was his best financial asset and changed his mind.

More than 30 of her works were displayed at the Royal Academy of Art from 1781 until 1801. She soon enhanced her reputation as an artist, especially when her portrait of the Duchess of Devonshire in the character of Cynthia was exhibited.

Rather than being a social embarrassment she could claim the Hon. Mrs. Darner, the Countess of Aylesbury; Lady Cecilia Johnston; and the Marchioness of Townshend among her acquaintances.

In 1784, the Cosways moved into Schomberg House, Pall Mall, and developed a fashionable salon for London society. Richard was Principal Painter of the Prince of Wales, and Maria served as hostess to artists, members of royalty including the Prince, and politicians including Horace Walpole, Gouverneur Morris and James Boswell all attended the couples soirees. Maria who could speak several languages and had an international circle of friends.

The man who would be the American President Thomas Jefferson met the Cosways in August 1786 at the Halle aux Bleds in Paris, through the American artist John Trumbull. According to Trumbull, the President’s entourage “was occupied with the same industry in examining whatever relates to the arts …. Mr. Jefferson joined our party almost daily.” Their excursions included sites such as Versailles, the Louvre, Louis XIV’s retreat Marly, the Palais Royal, St. Germain, and the Column at the Désert de Retz.

Jefferson was enchanted by Maria, and her departure from Paris in October 1786 compelled him to write the only existing love letter in the vast collection of his correspondence.

In ‘The dialogue between my Head and my Heart,” dated October 12th and 13th, 1786. Jefferson poured out the contents of both. The bulk of the letter is a dialogue between Jefferson’s calculating reason (for which he is well known) and his spontaneous emotions (for which he is lesser known). Jefferson describes his emotional state after she has left saying he is “the most wretched of all earthly beings” and his reason responds by admonishing him for his attachment. His heart defends itself saying that no one will care for him who cares for nobody.

Their marriage was never a happy one. Richard and Maria had one child together, Louisa Paolina Angelica. The couple eventually separated. Maria took herself back to the continent. On one occasion accompanied by Luigi Marchesi, a famous Italian castrato. Marchesi was reputed to have been the handsomest castrato of all time and was said to have been adored by the whole female population of Rome. Maria, was a beautiful woman who attracted the most gifted and handsome of men.

Whether she ever had a relationship with Jefferson remains a mystery. Though her husband’s extramarital affairs were no secret, Cosway was  a married woman and a devout Catholic when she met him so it is unlikely she entered into sexual relationship with him. The pair did however engage in correspondence.

After returning to America in 1789, Jefferson’s letters to her grew less frequent; partly due to the fact that he was increasingly preoccupied by his position as President George Washington’s secretary of state. She, however, continued to write to him. In her letters she vented her frustration at his growing aloofness. She clearly wanted a some passion to pass between them even if it was only in writing.  In his last letters, he spoke more of his scientific studies than of his love and desire for her. Finally he admitted that his love for her had been relegated to fond memories of when their relationship had been “pure.” Whatever that meant.

Their relationship was fictionalised in ‘Jefferson in Paris‘ a 1995 Franco-American historical drama film, directed by James Ivory, which had previously entitled Head and Heart. The screenplay, by Ruth Prawer Jhabvala, is a semi-fictional account of Thomas Jefferson’s tenure as the Ambassador of the United States to France before his Presidency and of his alleged relationships with British artist Maria Cosway and his slave, Sally Hemings.

Maria Cosway eventually moved to Lodi, in Italy, where  she established a convent school for girls. Cosway and Jefferson wrote to one another occasionally, with letters coming first from Cosway.

At her home in Lodi, Cosway kept the portrait of Jefferson by John Trumbull that is now at the White House. It was presented to the United States by the Italian government on the occasion of the 1976 Bicentennial of the American Revolution.

Today, Cosway’s paintings and engravings are held by the British Museum, the New York Public Library and the British Library. Her work was included in recent exhibits at the National Portrait Gallery in London in 1995–96 and the Tate Britain in 2006.