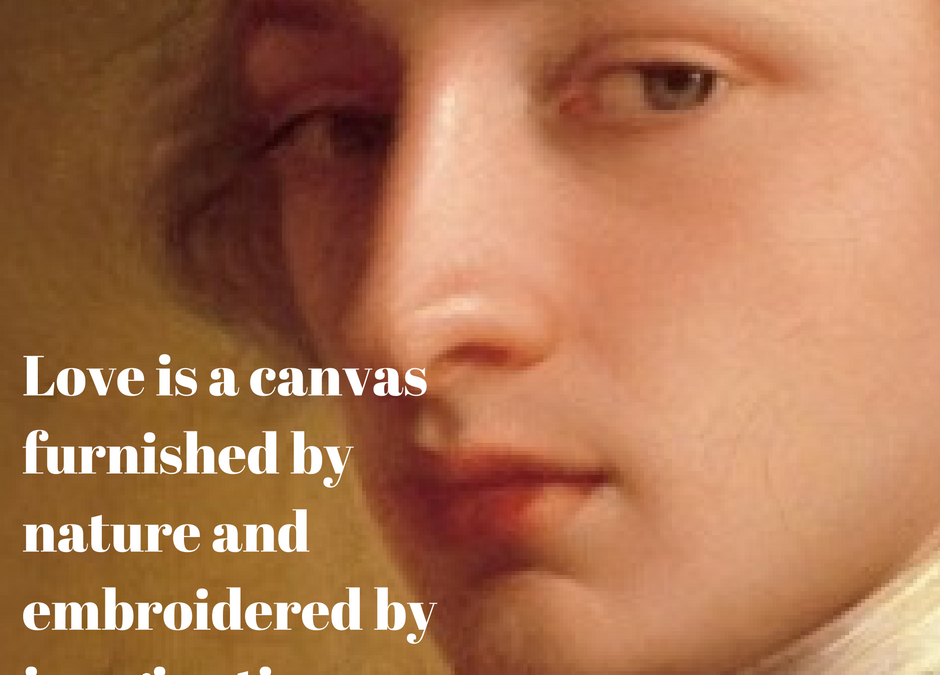 Voltaire, the great rationalist, was always falling in love and had numerous love affairs. His love life began with great passion when he was just seventeen years old.

‘Voltaire in Love‘ is perhaps the best known work about his love life. It is a popular history of the sixteen-year relationship between Voltaire and the Émilie, the Marquise du Châtelet. I wrote about Emilie last month, she was a great physicist who died tragically young giving birth to her lover’s child (not Voltaire’s their affair was long since over). The book was written by Nancy Mitford and first published in 1957. As well as telling the story of Voltaire’s love for Emilie it explores the French Enlightenment.

A musical featuring the music of Leonard Bernstein with contributions from the greatest lyricists of the 20th century, Stephen Sondheim to Dorothy Parker, is an outrageous musical satire that tells the story of Voltaire’s character, the naïve Candide, who is banished for romancing the Baron’s daughter only to be plagued by a series of absurd hardships that challenge his optimistic outlook of life and love. Candide will leave you enchanted. As you will see from the letter below the story is somewhat based on his own experience.

In my novel Sinclair, Voltaire (1694-1778), the French philosopher is one of my eponymous hero’s favourite authors. He takes a copy of Candide to India with him and loses it when the ship goes down but once he’s established himself in Tooley Street he’s quick to buy himself another copy.

“Knowing there was no going back, he made himself comfortable. He lit his lamp, took out a battered copy of ‘Candide’, his favourite book, and checked the hour with his treasured pocket watch. Like the book, it was French, and the most beautiful thing he had ever owned. He cradled it in his palm. The warmth of its golden body reminded him of the smoothness of a woman’s skin; its pearly white face was elegantly marked with Roman numerals; and the back, the part that he loved most of all, was made of cobalt blue enamel and shimmered like the silk of Iona McNeal’s ballgown the night they had danced at the Edinburgh Assembly Rooms. He turned it in his hand and kissed it then he put it back in his waistcoat pocket and started to read.

He chose the scene where Candide, the hero of the story, and his professor friend, Dr Pangloss, are nearly drowned in Lisbon harbour along with a sailor called Jacques. Candide and Pangloss survive, but Jacques dies attempting to save a fellow sailor. To explain how this is all part of God’s harmonious plan, Pangloss says that Lisbon harbour was created specifically so that Jacques could drown there and fulfil God’s divine plan for him. This was an idea so preposterous, like so many in the book, that it made Sinclair laugh out loud.”

Voltaire was incarcerated in the local prison for his own good to keep him away from the girl he had fallen in love with,Olympe Dunove.  Olympe’s mother and the French ambassador disapproved of their relationship. Such was the power of French aristocrats before the Revolution. Shortly after he wrote the letter below, he managed to escape by climbing out of the window.

Voltaire to Olympe Dunover, written in 1713 while in prison in the Hague.

“I am a prisoner here in the name of the King; they can take my life, but not the love that I feel for you. Yes, my adorable mistress, to-night I shall see you, and if I had to put my head on the block to do it.

For heaven’s sake, do not speak to me in such disastrous terms as you write; you must live and be cautious; beware of madame your mother as of your worst enemy. What do I say? Beware of everybody; trust no one; keep yourself in readiness, as soon as the moon is visible; I shall leave the hotel incognito, take a carriage or a chaise, we shall drive like the wind to Sheveningen; I shall take paper and ink with me; we shall write our letters.

If you love me, reassure yourself; and call all your strength and presence of mind to your aid; do not let your mother notice anything, try to have your pictures, and be assured that the menace of the greatest tortures will not prevent me to serve you. No, nothing has the power to part me from you; our love is based upon virtue, and will last as long as our lives. Adieu, there is nothing that I will not brave for your sake; you deserve much more than that. Adieu, my dear heart!”

According to Victor Hugo: “To name Voltaire is to characterize the entire eighteenth century.” Goethe regarded Voltaire to be the greatest literary figure in modern times, and possibly of all times. According to Diderot, Voltaire’s influence on posterity would extend far into the future.

Napoleon commented that till he was sixteen he “would have fought for Rousseau against the friends of Voltaire, today it is the opposite…The more I read Voltaire the more I love him. He is a man always reasonable, never a charlatan, never a fanatic.”

Frederick the Great commented on his good fortune for having lived in the age of Voltaire.

Catherine the Great had been reading Voltaire for sixteen years prior to becoming Empress of Russia in 1762. In October 1763, she began a correspondence with the philosopher that continued till his death. The content of these letters has been described as being akin to a student writing to a teacher.Upon Voltaire’s death, the Empress purchased his library, which was then transported and placed in The Hermitage.

In England, Voltaire’s views influenced Godwin, Paine, Mary Wollstonecraft, Bentham, Byron, and Shelley.[195] Macaulay made note of the fear that Voltaire’s very name incited in tyrants and fanatics. Voltaire was a man of reason and passion just like my character Sinclair. You can read about his escapades in my novel – see below.