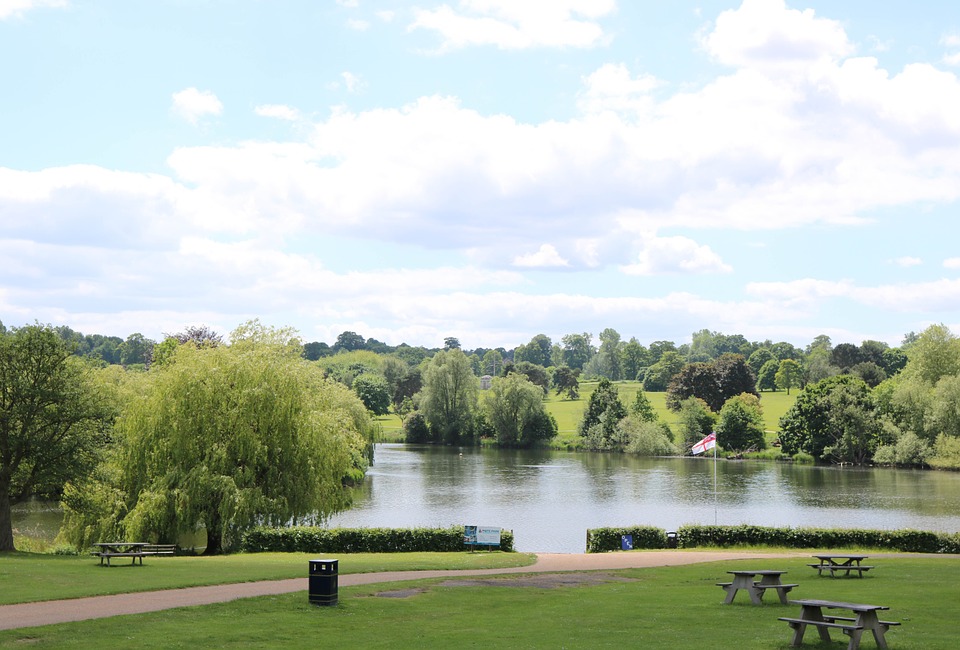 The landscaped park was a British style which would influence gardens throughout Europe from the 18th century onwards.

The style at a glance:

It drew inspiration from paintings of landscapes by Claude Lorrain and Nicolas Poussin. The new style that became known as the English garden was invented by landscape designers William Kent and Charles Bridgeman, working for wealthy patrons, including Richard Temple, 1st Viscount Cobham, Richard Boyle, 3rd Earl of Burlington, and banker Henry Hoare; men who had large country estates, were members of the anti-royalist Whig Party, had classical educations, were patrons of the arts, and had taken the Grand Tour to Italy, where they had seen the Roman ruins and Italian landscapes they reproduced in their gardens.
William Kent (1685–1748) was an architect, painter and furniture designer who introduced Palladian style architecture to England. Kent’s inspiration came from Palladio’s buildings in the Veneto and the landscapes and ruins around Rome—he lived in Italy from 1709 to 1719, and brought back many drawings of antique architecture and landscapes. His gardens were designed to complement the Palladian architecture of the houses he built. Charles Bridgeman (1690–1738) was the son of a gardener and an experienced horticulturist, who became the Royal Gardener for Queen Anne and Prince George of Denmark, responsible for tending and redesigning the royal gardens at Windsor, Kensington Palace, Hampton Court, St. James’s Park and Hyde Park. He collaborated with Kent on several major gardens, providing the botanical expertise which allowed Kent to realise his architectural visions.

Kent created one of the first true English landscape gardens at Chiswick House for Richard Boyle, 3rd Earl of Burlington. The first gardens that he laid out between 1724 and 1733 had many formal elements of a Garden à la française, including alleys forming a trident and canals, but they also featured something novel: a picturesque recreation of an Ionic temple set in a theatre of trees. Between 1733 and 1736, he redesigned the garden, adding lawns sloping down to the edge of the river and a small cascade. For the first time the form of a garden was inspired not by architecture, but by an idealised version of nature.

Stowe, in Buckinghamshire, (1730–1738), was an even more radical departure from the formal French garden. In the early 18th century, Richard Temple, 1st Viscount Cobham, had commissioned Charles Bridgeman to design a formal garden, with architectural decorations by John Vanbrugh. Bridgeman’s design included an octagonal lake and a Rotunda (1720–21) designed by Vanbrugh Stowe is frequently used as a setting for TV dramas and films. Here are just a few scenes filmed at Stowe Park: