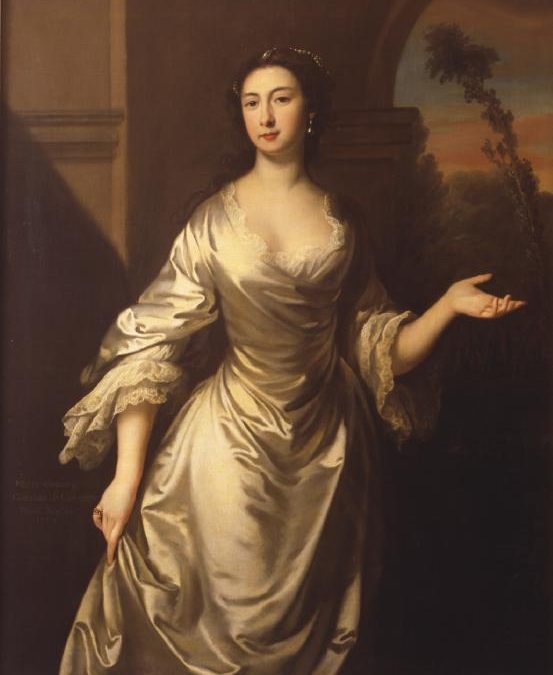 White skin was a must for the most fashionable boys and girls about town in the 18th century.  What we would call a healthy sun kissed complexion was a sure sign of being a peasant labouring on the land and not the sign of a lady or gentleman of leisure and so was to be avoided if one could afford it.

Although the 18th century is known as the Age of Enlightenment, most fashionable men and women poisoned themselves with make-up. Unbeknown to these fashionistas the lead based powder they were using to show their class and their wealth contributed to much of the poor health they suffered. It inflamed the eyes, attacked the enamel on the teeth and changed the texture of the skin causing it to blacken; it also made the hair fall out and it became fashionable to shave the front hairline to disguise its worst effects.

Both men and women of fashion applied bright pink rouge in circles and triangles to their powdery white faces in the form of Spanish wool; this was a pad of hair rather like a pan scourer impregnated with pink coloured lead. Lips were painted to appear small with the same pink powder or with carmine [a bright-red pigment obtained from the aluminium salt of carminic acid] to give a bee-sting effect.

Hair was powdered with the same lead based concoction and some women also powdered their shoulders and breasts. A pure white breasts was the vogue and was accentuated by painting veins onto it with blue paint making the bosom a toxic one. The eyes and eyelashes were mostly ignored.

To make white lead powder it was necessary to take plates of lead, and cover them with vinegar in a bowl. The bowl was left in a heap of horse manure – the manure gave off a slow gentle heat as it rotted (if you’ve kept a compost heap you’ll know what I mean). Three weeks later the lead is soft enough to be beaten to a powder and mixed with perfume and dye.

Maria Gunning, Countess of Coventry was the 18th century equivalent of Angelina Jolie; a celebrity who caused men to faint in awe of her beauty.Her beauty regime led to her nasty demise; the same toxic make-up is said to have killed well-known actress Kitty Fisher. Maria entered the social whirl of the Georgian Court in December 1750; within a year, her sister Elizabeth had married the Duke of Hamilton and in March 1752, Maria married the 6th Earl of Coventry and became the Countess of Coventry. For their honeymoon, the Earl and Countess travelled around Europe accompanied by Lady Petersham, but neither lady enjoyed it much, especially Maria who particularly disliked Paris. The Countess’s ignorance of the French language and her husband’s decision not to allow her to wear red powder as make-up (which was fashionable in Paris at the time) intensified her dislike of the city and the trip. On one occasion, her husband saw her arrive at dinner with powder on her face and tried to rub it off with his handkerchief but it was no use she was a make-up addict and it killed her. 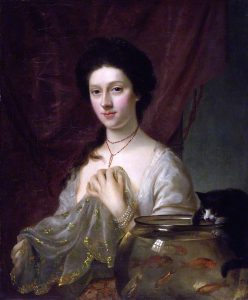 Dressing one’s hair was time consuming and expensive and had to last as long as possible. Rich women rarely wore whole wigs, instead, they hired professional hairdressers (coiffures) who added false hair to their natural hair to big it up and then they added padding, powder, and ornaments, as a women’s hair was supposed to remain “natural” and not have the obvious artificiality of men’s wigs.

Styles sometimes lasted several weeks or months, which could make sleeping difficult, sometimes a wooden block was used as a headrest instead of a pillow to prolong its life. Long scratching sticks were needed when hair became infested with lice. The fashion in France, where all fashions began and were the most extreme, led many men and women to shave their heads for ease and comfort preferring to wear nothing but wigs in public.

Men in particular needed wigs for work and business. There was the Campaign Wig, worn by military men, vicars, lawyers and just about everyone who held a profession or public office needed a wig so the trade was huge and most towns had a thriving trade in wig making. Highly fashionable fops, known as The Macaronis chose elaborate high wigs, sometimes worn up to 18 inches high, they carried men’s fashions and men’s cosmetics to a new extreme. Town and Country Magazine 1764 described them: “They make a most ridiculous figure… it is a puzzle to determine the thing’s sex.”

As the century progressed hair styles and wigs got simpler. The most popular became the Tie Wig where the hair was drawn back from the face and tied at the back of the head with a black ribbon; the tied hair was called a ‘queue’, meaning tail. Men were always clean shaven; beards and moustaches were unpopular, except with the military.