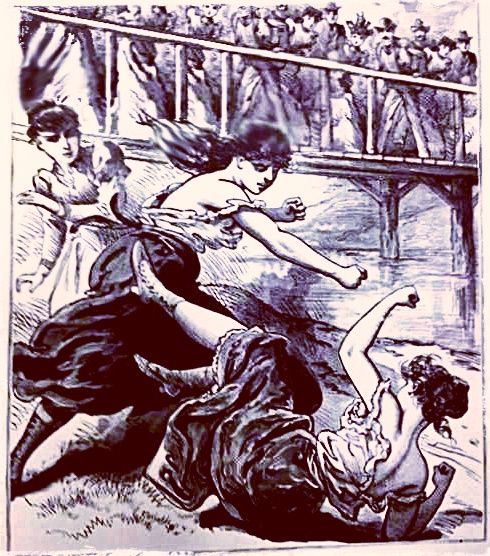 In her historical novel set in Bristol, Bath, and London, Anna Freeman follows the story of a young prostitute plucked from the brothel and trained as a female boxer. The story is based on real women who boxed in Georgian England. Anna got the idea of writing a book about women boxers from a children’s book (Horrible Histories) about Georgian Britain. In it there was a reproduction of an advertisement in the Daily Post dated 1728 in which a woman by the name of Ann Field  challenged Elizabeth Stokes to fight her:

“I, Ann Field, of Stoke Newington, ass driver, well-known for my abilities in my own defence… having been affronted by Mrs Stokes, styled the European Championess, do fairly invite her to a trial of her best skill in Boxing, for 10 pounds…”

“I, Elizabeth Stokes, of the City of London, have not fought this way since I fought the famous Boxing Woman of Billingsgate 29 minutes and gained a complete victory… but as the famous ass-woman of Stowe Newington dares me to fight her for the 10 pounds, I… doubt not that the blows I shall present her with will be more difficult to digest than any she ever gave her asses.”

This particular fight took place at ‘Mr. Stokes’ amphitheater’, which was owned by Elizabeth’s husband, James. It was a place in which all kinds of brutal entertainments could be seen. An advert for the amphitheater from 1735 promises:

“…fine diversion of bulls, bear, and ass-baiting, and dog fighting, particularly, and a dog will be dressed up with fireworks to augment the diversion of the spectators.”

Elizabeth Stokes fought alongside her husband against other couples, in much the way you might play tennis doubles today. Elsewhere, there are records of women fighting against men, and even several women fighting one man. Elizabeth Stokes was also known to fight with weapons, including the short sword and the cudgel, and apparently, she was very skilled. It should be noted that although Stokes and her husband took on other couples in mixed fights, men and woman never fought each other. Stokes is perhaps the most famous female fighter of the Georgian period, but there were others, including the famous ‘Bruising Peg’ who was of Amazonian proportions and quite terrifying (also very rough), and in 1795 two famous male boxers Mendoza and ‘Gentleman Jackson’ acted as seconds in a fight between Mrs. Mary Ann Fielding and a ‘Jewess of Wentworth Street’. The fight lasted 80 minutes and there were over 70 knockdowns between them for a prize of 11 guineas.

In October 1726 a fight was announced between Stokes and the Irish Mary Welch, to take place at James Stokes’ amphitheater. A note at the bottom of the advert states “They fight in cloth Jackets, short Petticoats, coming just below the Knee, Holland Drawers, white Stockings, and pumps.” At the time it was more common for women, sometimes prostitutes, to fight topless. By competing fully clothed Wilkinson and her opponents defined themselves as serious athletes.

Little evidence survives to detail Stokes life. She was born in London Elizabeth Wilkinson, referring to herself as being ‘of the famous city of London’ in proclamations. She appears to have come from a working-class English background, typical of English boxers of the time. It is unclear whether Elizabeth Wilkinson was her birth or legal name. There has been speculation that she was either married or related to Robert Wilkinson, a prizefighter, thief and murderer executed on 24 September 1722. She probably married the pugilist James Stokes; a 1725 report describes her as his ‘ much-admired consort’ and sometime between 1722 and 1726, she became known as Elizabeth Stokes. After her last documented fight in 1728, no further information about her life can be found in the historical record.

Bare-knuckle fighting for women continued into the 19th century, drawing an ever-rougher crowd. Fights were often staged at dawn before everyone went to work, or as they were coming home. The Victorian period drove bare-knuckle fighting underground, and in 1867, the Marquess of Queensberry made boxing a sport for gentlemen.