A Nice Bit of Blue and White 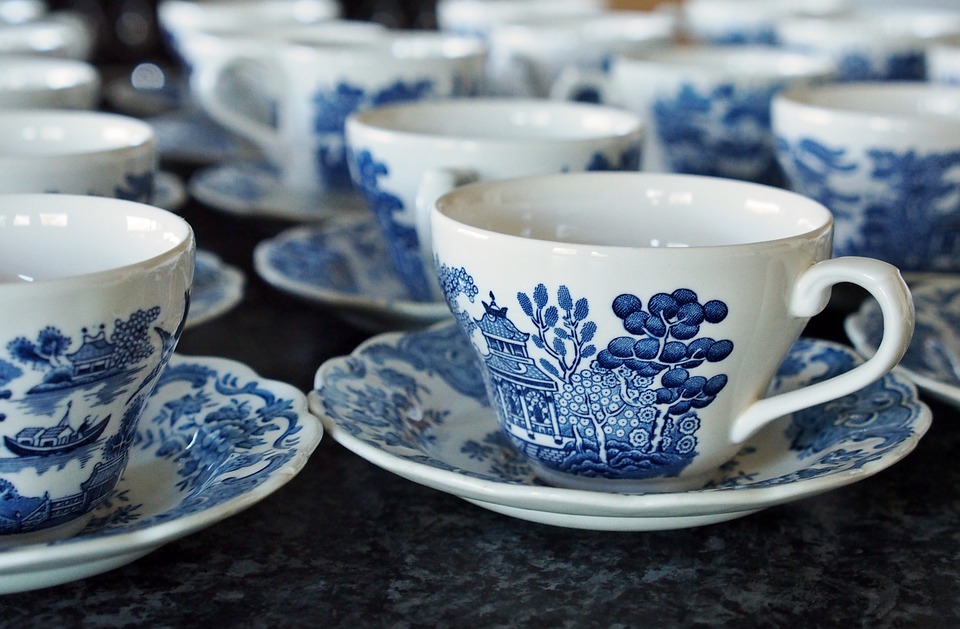 I drive past the Spode Factory each time I pick up or drop off my daughter at university; so as I have always been a fan of nice bit of porcelain I decided to find out about it.

The factory was started by one Josiah Spode in 1761. The enterprising Josiah worked for Thomas Whieldon from the age of 16 until he was 21 then he went into business for himself, renting a small potworks in the town of Stoke-on-Trent.

Josiah Spode’s claim to pottery fame is the introduction of underglaze blue transfer printing on earthenware in 1783–84. The Worcester and Caughley factories were already doing this but on porcelain which was much more expensive.  To adapt the process from the production of small porcelain tea wares to larger earthenware dinner wares required the creation of more flexible paper to transmit the designs from the engraved copper plate to the biscuit earthenware body, and the development of a glaze recipe that brought the colour of the black-blue cobalt print to a brilliant perfection. When Spode employed the skilled engraver Thomas Lucas and printer James Richard, both of the Caughley factory, in 1783 he was able to introduce high quality blue printed earthenware to the market and blue underglaze transfer became a standard feature of Staffordshire pottery.

Another innovation was the standardisation of the formula for fine English porcelain. Although the Bow porcelain factory, Chelsea porcelain factory, Royal Worcester and Royal Crown Derby factories had their own versions of the recipe Josiah Spode effectively finalised the formula between 1789 and 1793 however some credit must also be given to Alexandre Brongniart, director of the Sèvres manufactory who came up with much the same combination of ingredients.

After some early trials Spode perfected a ‘stoneware’ that came closer to porcelain than any previously, and introduced this as “Stone-China” in 1813. Spode pattern books record about 75000 patterns that survive from about 1800 for this product.

Messrs Spode were succeeded in the same business in c. 1833 by Copeland and Garrett, who often used the name Spode in their marks. After 1847 the business continued until 1970 as W.T. Copeland and sons, and again the term ‘Spode’ or ‘Late Spode’ continued in use alongside the name of Copeland. Under the name ‘Spode Ltd’ the same factories and business was continued after 1970. In 2006, the business merged with Royal Worcester but the company went into administration on 6 November 2008 and the brand names were acquired by Portmeirion Group on 23 April 2009. Many items in Spode’s Blue Italian and Woodland ranges are now made at Portmeirion Group’s factory in Stoke-on-Trent which is just around the corner from Staffordshire University.