The Doxy and the Duke 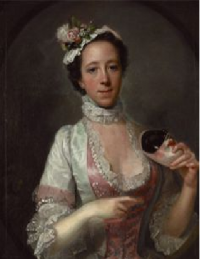 English society expected, even encouraged, men to pay for sex in the 18th century. Prejudice and the law barred women from all but the most menial of jobs so prostitution with all its dangers was a career option worth exploring for some becasue a typical harlot could earn in a month what a tradesman or clerk earned in a year. For a few beautiful and savvy women, this gamble paid off. Some became successful matrons of ‘Disorderly Houses’ while the occasional woman came up trumps and married a duke.

One girl who got her man was Lavinia Fenton. Lavina was born in 1708; the illegitimate daughter of a naval lieutenant named Beswick, her mother’s name is not recorded. When her mother’s lover died at sea she married a Mr Fenton, a man who ran a coffee house near Charring Cross. Mr Fenton it seems was a good sort who sent his adopted daughter to boarding school. Therefore, Lavinia had the advantage of not only her beauty and wit but of education.

By 1725 she had attracted the attentions of a Portuguese nobleman who, having run up debts catering for her desires, ended up in the Fleet Prison. It was after this, in 1726, that another unnamed aristocrat used his influence to launch her career on the London stage. Her first appearance was as Monimia in Thomas Otway’s The Orphan: or The Unhappy Marriage, in March 1726.

Shortly after she appeared as Cherry Boniface in The Beaux Stratagem and went onto join the company of players at the theatre in Lincoln’s Inn Fields but it was as Polly Peacham in John Gay’s Beggar’s Opera, she found her greatest success. The play was a runaway success. Politicians smarted at being portrayed as highwaymen, fences, pickpockets and molls, but the public loved it and bought playing cards, fans and parlour screens imprinted with scenes or lyrics of the dashing MacHeath, or of Polly Peachum’s true-love.In her first season as Polly Peacham, Lavinia became the talk of the town and the object of Charles Powlett, 3rd Duke of Bolton’s desire.

Like many men of his rank he was locked in a loveless marriage to Lady Anne Vaughan, a daughter of the 3rd Earl of Carbery. Lady Anne, Lady Montague wrote, was “educated in solitude with some choice books, by a saint-like governess: crammed with virtue and good qualities, she thought it impossible not to find gratitude, though she failed to give passion; and upon this she threw away her estate, was despised by her husband and laughed at by the public.”

Contemporary accounts describe Bolton as “a handsome, agreeable libertine” and, “absolutely a fool” and a rogue. Memoirs of the Reign of George II records him as  “being as proud as if he had been of any consequence besides what his emploments made him, as vain as if he had some merit, and as necessitous as if he had no estate, so he was troublesome at Court, hated in the country, and scandalous in his regiment. The dirty tricks he played to cheat the Government of men, or his men of half-a-crown, were things unknown to any Colonel but his Grace, no griping Scotsman excepted.” So, perhaps he wasn’t that much of a catch after all.

Lavinia became Bolton’s mistress during the first season of The Beggar’s Opera in 1728 and gave up the stage to become a ‘kept woman’ in 1729. William Hogarth used the scandal in his series pictures of the Beggar’s Opera showing Lavinia looking past Mackheath, to the Duke standing in his box.

The pair eloped to the continent in 1729.  John Gay commented on the event in a letter to Jonathan Swift: “The Duke of Bolton, I hear, has run away with Polly Peachum, having settled £400 a year on her during pleasure, and upon disagreement £200 a year.”

Lavinia gave the Duke three illegitimate children. When his wife Anne died in 1751 Lavinia finally got her man and the pair were married in Aachen. By then the Duke had lost most of his income. He died three years later in 1754. Their sons Charles, Percy, and Horatio had no estate or wealth to inherit. Consequently, Charles went into the church, Percy the navy, and Horatio the army.  Lavinia, now the duchess, died in 1760. She spent her last days at Westcombe House in Greenwich which she and Charles had shared since their marriage, and was buried in the nearly church of St Alfege. Peachum Road, close to the site of Westcombe House, was named in honour of her role as Polly Peachum.

Character’s Theater: Genre and Identity on the Eighteenth-Century English Stage, Lisa A. Freeman

http://thepeerage.com/ Cokayne, and others, The Complete Peerage, volume II, page 214.