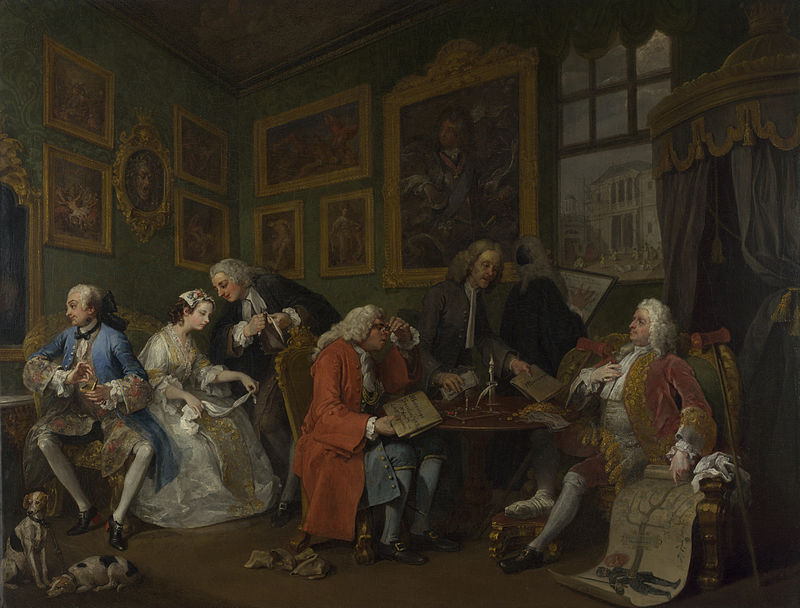 Marital ethics were the topic of much debate in 18th-century Britain. The many marriages of convenience and their attendant unhappiness came in for particular criticism, with a variety of authors taking the view that love was a much sounder basis for marriage than money. Hogarth for one felt the disquiet in British society sufficient to satirise it in a series of paintings called Marriage a la mode.

In the first of the series, The Marriage Settlement Hogarth shows an arranged marriage between the son of bankrupt Earl Squanderfield and the daughter of a wealthy but miserly city merchant. The construction on the Earl’s new mansion, visible through the window, has stopped as a usurer negotiates payment for further work at the centre table. The gouty Earl proudly points to a picture of his family tree. The son views himself in the mirror, showing where his interests in the matter lie. The distraught merchant’s daughter is consoled by the lawyer Silvertongue while polishing her wedding ring. Even the faces on the walls appear to have misgivings. Two dogs chained to each other in the corner mirror the situation of the young couple.

The pressure put on many young people to marry the ‘right’ person led to many secret marriages with the right people for them. This was possible because until the middle of the 18th century marriages could take place anywhere provided they were conducted before an ordained clergyman of the Church of England. Of course, this also left a lot of scope for bigamy and marriages to girls who were under age.

The trade in these irregular marriages had grown enormously in London by the 1740s and led to the introduction of the Marriage Act 1753, popularly known as Lord Hardwicke’s Marriage Act. This Act was the first statutory legislation in England and Wales to require a formal ceremony of marriage. The Act came into force on 25 March 1754 making the reading of banns, registration of a marriage and need for the marriage to be witnessed compulsory for the first time.

No marriage of a person under the age of 21 was valid without the consent of parents or guardians. Clergymen who disobeyed the law were liable for 14 years transportation. Jews and Quakers were exempted from the 1753 Act, but it required other religious non-conformists and Catholics to be married in Anglican churches.

The idea of secret marriage was taken up in the 1766 play, The Clandestine Marriage by George Colman the Elder and David Garrick. The play is a comedy and was first performed in 1766 at Drury Lane. The plot concerns a merchant, Mr Sterling, who wants to marry off his elder daughter to Sir John Melvil, who is in love with his younger daughter, Fanny. Fanny, however, is in love with a humble clerk, Lovewell, whom she has secretly married. Her attempts to extricate herself from the arrangement with Melvil lead to her being offered as a bride to Melvil’s elderly uncle, Lord Ogleby. But the truth comes out and she is saved from the awful fate of having to marry a man many years her senior whom she does not love and she and Lovewell are forgiven. In 1999, the play was made into a film directed by Christopher Miles and starring Nigel Hawthorne, Joan Collins, Timothy Spall, Emma Chambers and Tom Hollander.

Paul Nicholls and Natasha Little as the lovers in The Clandestine Marriage, 2000.

The Act did not change the position of a wife in law. On marriage, a woman became the property of her husband as soon as she said. “I do.” Clandestine and illegal marriages were not the exclusive domain of the wealthy. Many poor women where duped by unscrupulous, indecisive and inconstant men. Perhaps the most famous woman to be duped in this was Maria Fitzherbert (26 July 1756 – 27 March 1837) the secret wife of George, Prince of Wales, the future George IV.

In 1783 George, Prince of Wales became infatuated with her, wanting her to become his mistress but Maria’s devout Catholic beliefs would not allow it. So on 15 December 1785 they were married in a secret ceremony conducted by Robert Burt, an impoverished curate who set aside his scruples for the £500 fee. The marriage of course was not legal. It not only contravened the 1753 Marriage Act it was also in breach of the Act of Settlement of 1701, preventing a Roman Catholic from ascending the British throne and the Royal Marriage Act of 1772.

George and Maria spent much of their time in Brighton where Mrs Fitzherbert was treated as queen although George must have known that she never would be. Whether she was ignorant or deluded concerning her position is unknown. The couple separated when George’s affections turned to Frances, Countess of Jersey in 1794 and Maria’s position was finally put asunder when George married his cousin Caroline of Brunswick in 1795 with the benefit of law.