The Princess Who Married The Hunchback Prince 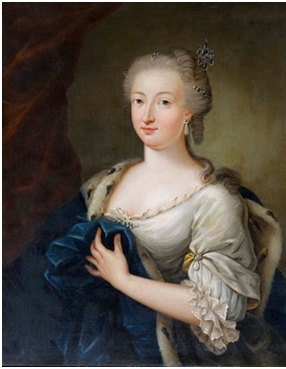 Anne, The Princess Royal, married the hunchback William of Orange in 1734.

Anne was born into what we would call an extremely dysfunctional family in May 1709. George II was the only son of the German prince George Louis, elector of Hanover (King George I of Great Britain from 1714 to 1727), and Sophia Dorothea of Celle. George, I had divorced and locked Sophia Dorothea in a castle in Celle for her adultery with a Swedish cavalry officer and taken their children, which include the boy who would become George II away from her. George II had, of course, never forgiven his father for his cruel treatment of his mother.

George II’s daughter Anne was a remarkable woman in many ways. She was criticised and praised in equal measure by contemporary chroniclers. Some said she was arrogant others that she was accomplished.

Although Anne was an English princess, she was born at Herrenhausen Palace, Hanover. Her mother was Caroline of Ansbach. According to a recent biography of Caroline, The First Iron Lady: A Life of Caroline of Ansbach By Matthew Dennison, she was the real power behind George II. When she arrived in England in 1714, she became the first Princess of Wales since Prince Henry married Catherine of Aragon in 1509. She was blonde, buxom and above all, intelligent. Anne was one of the couple’s four children.

Her parents’ relationship with King George I was a troubled one. Her mother, Caroline of Ansbach, had been brought up in the Prussian Court where she had been treated as a surrogate daughter to the Prussian King and had been well educated.

When she married, she joined the Hanoverian Court, which was by comparison boorish. How much that experience influenced her opposition to George I in England we do not know, but the two did not get on. One wonders if Caroline suspected her father-in-law of having her mother-in-law’s lover killed? There were always rumours surrounding the disappearance of her Swedish lover.

Political differences between George I and his son the Prince of Wales led to factions in the court. The family dispute came to a head following the birth of George and Caroline’s second son, Prince George William in 1717. At the baby’s christening, the Prince of Wales publicly insulted the Duke of Newcastle one of his father’s allies. This so infuriated George I he banished his son and daughter-in-law from St James’s Palace, but he kept their children, including Anne under his guardianship at Leicester House.

The Prince and Princess of Wales were sent packing without their children. George, I kept them separated until 1720 when Anne’s brothers were returned to the care of her parents, but the girls remained the wards of the King.

In that year, Anne’s body was ravaged by smallpox; she was 11 years old. The disease killed an estimated 400,000 Europeans a year during the closing years of the 18th century.

Smallpox had no respect for wealth or rank, anyone could catch it. Her own father had suffered from the disease in the first year of his marriage. Her personal near-death experience and the experience and her father led the family to support the introduction of variolation (an early type of immunisation against smallpox), which had been witnessed by Lady Mary Wortley Montague and Charles Maitland in Constantinople.

Variolation or inoculation was the method first used to immunise an individual against smallpox (Variola) with material taken from a patient or a recently variolated individual in the hope that a mild, but the protective infection would result. The procedure was most commonly carried out by inserting/rubbing powdered smallpox scabs or fluid from pustules into superficial scratches made in the skin. The patient would develop pustules identical to those caused by naturally occurring smallpox, usually producing a less severe disease than naturally acquired smallpox. Eventually, after about two to four weeks, these symptoms would subside, indicating successful recovery and immunity.

To test the process, Caroline ordered six prisoners who had been condemned to death to take part in the trial. They were offered the chance to undergo variolation instead of execution. They all agreed, and they all survived, as did the six orphan children who were also part of the test. (There were no medical ethics committees then). The tests convinced Caroline of variolation’s safety, and the Queen had her two younger daughters, Amelia and Caroline, inoculated. Royal patronage of the process was a boon to the doctors who were prescribing the process, and variolation began to spread amongst the upper classes.

On 22 June 1727, George I died making Anne’s father king. The following year, her elder brother, Frederick, who had been educated in Germany, was brought to England to join the court. Father and son had not seen one other in 14 years, and when they did, the fireworks began. Their relationship was even more tempestuous than the one between George I and George II especially after 1733 when Frederick purchased Carlton House and set up what George II considered to be a rival court.

As a daughter of the future British King Anne’s marriage was always going to be a dynastic one. But, as a princess requiring a protestant marriage, her options were limited, most of the continent was ruled by Catholic princes. The government hit on the idea of a union with the rather lowly William, Prince of Orange-Nassau to sure up their anti-French alliance.

George II was not enamoured with the proposal, and Anne was concerned herself. The Dutch Prince William had a well-known physical deformity. Anne wanted to know more about his deformity before she agreed to see him, so she dispatched Lord Hervey, a close confidant, to report on its extent. Hervey said that William was no Adonis. William suffered from a pronounced curvature of the spine, which was probably the result of sclerosis, the same condition suffered by the English King Richard III. or Kyphosis the hunchback disease.

A normal thoracic spine extends from the 1st to the 12th vertebra and should have a slight kyphotic angle, ranging from 20° to 45°. When the “roundness” of the upper spine increases past 45° it is called kyphosis or “hyperkyphosis”. Scheuermann’s kyphosis is the most classic form of hyperkyphosis and is the result of wedged vertebrae that develop during adolescence. The cause is not currently known and the condition appears to be multifactorial and is seen more frequently in males than females. The condition must have made life very hard for William who apart from the problem with his spine was considered an attractive, educated, and accomplished Prince.

Having taken Hervey’s report into consideration and the inferiority of William’s territory, Anne decided she would take him. She was 25 years old, and it seems she did not want to end up an old maid surrounded by her warring relatives. When they married in 1734, her mother and sisters wept through the ceremony, and Lord Hervey described the marriage as more sacrifice than celebration.

As an outsider and British, Anne was not popular in the Netherlands. Her life must have been a lonely one because she did not get along with her mother-in-law, and her husband was frequently on campaign. France was an ever-present threat to William’s protestant country and his power base dependent on his ability to protect the states of the Dutch Republic from its enemies.

In these lonely years, Anne concentrated her efforts on literature and playing the harpsichord; she was an accomplished, artist, musician, and lifelong friend of her music teacher Handel.

Producing the required heir was problematic too. In 1736, she gave birth to a stillborn daughter and another in 1739. Her first live birth came in 1743 with the arrival of Princess Carolina of Orange-Nassau who was followed by another daughter, Princess Anna two years later. Her only son arrived in 1748 when she was 39 years old.

Anne became a widow in 1751 at the age of 40 and was appointed as Regent for her 3-year-old son, Prince William V. She was given all prerogatives usually given a hereditary Stadtholder of the Netherlands, except for the military duties of the office, which were entrusted to Duke Louis Ernest of Brunswick-Lüneburg. To say that she took to the role like a duck to water would not be an exaggeration. Finally free to exercise some power of the own, in true Hanoverian style, Anne used her wit and her determination to secure her personal power base and with it the dominance of her family and the Orange dynasty.

As Regent she was hard-working, but she remained unpopular. The commercial rivalry between the Dutch and the British East India Companies was part of the cause, her Dutch subjects were never entirely sure she was on their side because she pursued a foreign policy, that favoured the British-German alliance over alliance with the French. Another reason was the constitution of the United Provinces. But what made her most unpopular was that she seized the opportunity to centralise power in the office of the hereditary Stadtholder over the traditional rights of the Dutch states, particularly the State of Haarlem.

Ultimately, as a woman, she was reliant on the men around her, and it is fair to say that her husband and her son were fighting a losing battle against the tide of history at the end of the 18th century. Even Anne, with all her skills, could not realise the ambitions of the House of Orange on her own. She ruled the Netherlands for eight years. She died of dropsy (an accumulation of fluid in the body that leads to heart failure) in 1759. Her son was twelve and still too young to take the reins of power.

Anne was replaced as Regent by her mother-in-law, Marie Louise of Hesse-Kassel and when she died in 1765, Anne’s daughter, Carolina, was made Regent until her younger brother William V turned 18 in 1766.

Anne was a remarkable woman in many ways. Her beauty was shredded by smallpox, but she took on the world and won. (I am sure she took the opportunity to show herself in the best light in her self-portrait above.) She accepted and made a success of her marriage, which on the face of it held little prospect for personal happiness. She was an intelligent if haughty woman who endured years of loneliness, the pain of giving birth to two stillborn children and then she was widowed. Anne exercised the role of Stadholder (chief executive of the Dutch Republic) as effectively as any man and the centralisation of power she created laid the foundations of the Dutch state and its royal family. Her grandson, William I became the first king of the Netherlands in 1815.

Julia Herdman writes historical fiction that puts women to the fore. Her latest book Sinclair, Tales of Tooley Street Vol. 1. is  Available on Amazon – Paperback £10.99 and on Kindle.

A Labour in Vain – The Tragic Death of Princess Charlotte Augusta