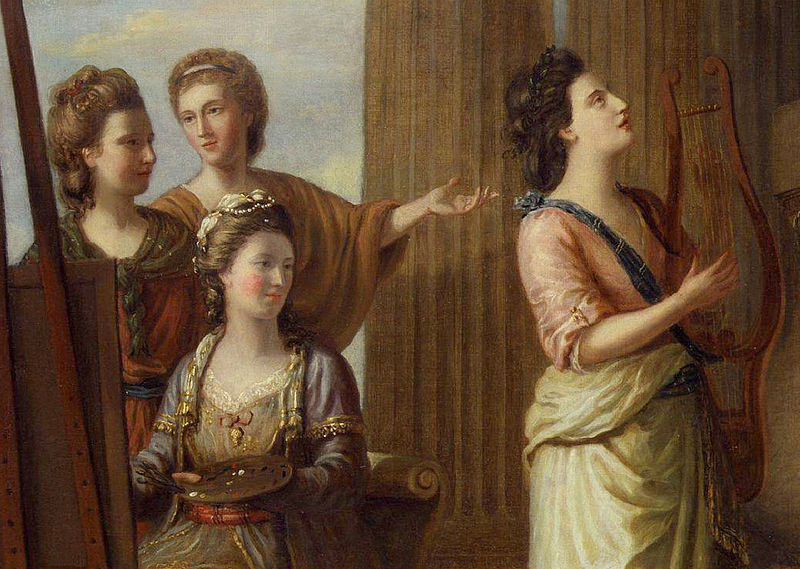 Anna Laetitia Barbauld, née Aikin; 20 June 1743 – 9 March 1825 was a prominent English poet, essayist, literary critic, editor, and children’s author. Anna was a “woman of letters” who published in multiple genres. Anna had a successful writing career at a time when female professional writers were rare. She was a noted teacher at the Palgrave Academy a school by English Dissenters run by Anna and her husband, Rochemont, 1774 to 1785 in Suffolk. The academy attracted parents who wished an alternative to traditional education for their sons.

Anna was born into the tradition of the so-called dissenting academies, as her father John Aikin taught first at Kibworth Academy, where she received a better education than most girls and women of the day, and then at the renowned Warrington Academy, known as “the Athens of the North” for its stimulating intellectual atmosphere. Rochemont Barbauld, the grandson of a Huguenot (French Dissenter), had been a pupil there.

Her marriage to Rochemont was viewed as an act of sacrifice by her friends and family. Prone to bouts of ‘insanity’ she did not want to make him more melancholic by refusing his offer. The couple spent eleven years teaching at Palgrave where Anna was not only responsible for running her own household but also the school’s; she was accountant, maid, and housekeeper. There she started to write ‘primers’ early text books. Her teaching materials remained popular for more than a century. She also engaged herself in politics through essays encouraging authors such as the abolitionist, poet and translator Elizabeth Benger to emulate her.

It seems that Barbaulds were concerned that they would never have a child of their own and in 1775, after only a year of marriage, they suggested that they should adopt one of Anna’s brother’s children. She wrote:

“I am sensible it is not a small thing we ask; nor can it be easy for a parent to part with a child. This I would say, from a number, one may more easily be spared. Though it makes a very material difference in happiness whether a person has children or no children, it makes, I apprehend, little or none whether he has three, or four; five, or six; because four or five are enow [sic] to exercise all his whole stock of care and affection. We should gain, but you would not lose.”

Eventually her brother conceded and the couple adopted Charles; it was for him that Anna wrote her most famous books: Lessons for Children (1778–79) and Hymns in Prose for Children (1781).

In September 1785, the Barbaulds left Palgrave for a tour of France; Rochemont’s mental health had been deteriorating and he was no longer able to carry out his teaching duties. In 1787, they moved to Hampstead where Rochemont was asked to serve as the minister at what later became Rosslyn Hill Unitarian Chapel. It was here that Anna became close friends with Joanna Baillie, the playwright. It was during this time, the heyday of the French Revolution, that Anna published her most radical political pieces. From 1787 to 1790, Charles James Fox attempted to convince the House of Commons to pass a law granting Dissenters full citizenship rights. When this bill was defeated for the third time, Anna wrote one of her most passionate pamphlets, An Address to the Opposers of the Repeal of the Corporation and Test Acts. Readers were shocked to discover that such a well-reasoned argument should come from a woman. In 1791, after William Wilberforce’s attempt to outlaw the slave trade failed, Anna published her Epistle to William Wilberforce Esq. On the Rejection of the Bill for Abolishing the Slave Trade, which not only lamented the fate of the slaves but also warned of the cultural and social degeneration the British could expect if they did not abandon slavery. In 1792, she continued this theme of national responsibility in an anti-war sermon entitled Sins of Government, Sins of the Nation.

Anna’s career ended abruptly in 1812 with the publication of Eighteen Hundred and Eleven, which criticised Britain’s participation in the Napoleonic Wars. The work received vicious reviews and she published nothing else during her lifetime. Her reputation was further damaged when many of the Romantic poets she had inspired in the heyday of the French Revolution turned against her.

Anna died in 1825, a renowned writer, and was buried in the family vault in St Mary’s, Stoke Newington. Afterwards, a marble tablet was erected in the Newington Green Chapel with the following inscription:

And Wife of The Rev. Rochemont Barbauld, Formerly the Respected Minister of this Congregation.

Endowed by the Giver of all Good With Wit, Genius, Poetic Talent, and a Vigorous Understanding

She Employed these High Gifts in Promoting the Cause of Humanity, Peace, and Justice,

of Civil and Religious Liberty,of Pure, Ardent, and Affectionate Devotion.

Let the Young, Nurtured by her Writings in the Pure Spirit of Christian Morality;

Let those of Maturer Years, Capable of Appreciating the Acuteness, the Brilliant Fancy, and Sound Reasoning of her Literary Compositions; Let the Surviving few who shared her Delightful and Instructive Conversation, Bear Witness That this Monument Records No Exaggerated Praise.