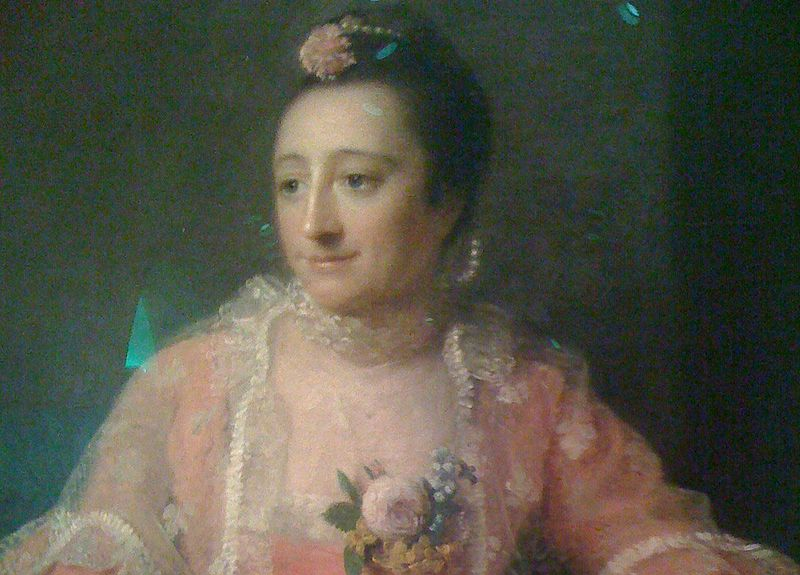 The Blue Stockings Society was founded in the early 1750s by Elizabeth Montagu (seen above), Elizabeth Vesey and others as a women’s literary discussion group, a revolutionary step away from traditional, non-intellectual, women’s activities. They invited both women and men to attend, including botanist, translator and publisher Benjamin Stillingfleet. One story tells that Stillingfleet was not rich enough to have the proper formal dress, which included black silk stockings, so he attended in everyday blue worsted stockings. The term came to refer to the informal quality of the gatherings and the emphasis on conversation over fashion.

Diarist, James Boswell wrote, “It was much the fashion for several ladies to have evening assemblies, where the fair sex might participate in conversation with literary and ingenious men, animated by a desire to please. These societies were denominated Bluestocking Clubs”.

It was a loose organisation of privileged women with an interest in education to gather together to discuss literature while inviting educated men to participate. The women involved in this group generally had more education and fewer children than most English women of the time. These women preferred to challenge the traditional view of what was ‘becoming’ such as proficiency in needlework and knitting preferring to read Greek or Latin, and many of the most immodest texts so they had their critics. Among them was one of their own members Mrs. Barbauld. Anna Laetitia Barbauld (1743 – 1825) was a prominent “woman of letters” who published in multiple genres; Barbauld had a successful writing career at a time when female professional writers were rare. To find out more about her read my blog No Exaggerated Praise. Barbauld wrote, “The best way for a woman to acquire knowledge is from conversation with a father, or brother, or friend.”
The original bluestocking circle included Hester Thrale, Hannah More, Hester Chapone, Mary Delany, Margaret Bentinck, Duchess of Portland, Elizabeth Carter, Sir Joshua Reynolds and his sister Frances, Fanny Burney, Samuel Johnson, William Pulteney, 1st Earl of Bath, James Boswell, David and Eva Garrick, Edmund Burke, George Lyttelton, Mrs Ord, Mrs Crewe and Benjamin Stillingfleet the man with the blue stockings.

The group has been described by many historians and authors as having preserved and advanced feminism due to the advocacy of women’s education, social complaints of the status and lifestyle expected of the women in their society as expressed by Elizabeth Montague in 1743. “In a woman’s education little but outward accomplishments is regarded … sure the men are very imprudent to endeavour to make fools of those to whom they so much trust their honour and fortune, but it is in the nature of mankind to hazard their peace to secure power, and they know fools make the best slaves.”
By the early 1800s, this sentiment had changed, and it was much more common to question “why a woman of forty should be more ignorant than a boy of twelve?”
The term ‘Blue Stocking’ today refers to an intellectual woman and the name is used frequently by feminist organisations and businesses, for example: