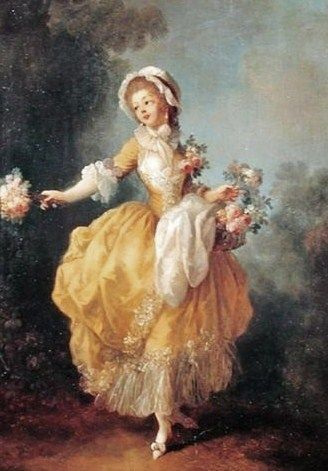 The Royal Swedish Ballet is one of the oldest ballet companies in Europe. Based in Stockholm, Sweden, King Gustav III founded the ballet in 1773 as a part of his project to bring his kingdom to the fore in European culture. Gustav III wanted to create Swedish ballet dancers and to do this he encouraged foreign dancers to live and work in Sweden and Giovanna Bassi (1762–1834), an Italian trained ballet dancer, responded to the king’s request as her brother; the architect Carlo Bassi (1772–1840); was already living there.

Giovanna who had trained in Italy moved to Paris where she was the student of Jean Dauberval the creator of La Fille Mal Gardée, one of the most enduring and popular works of the ballet repertoire today. Giovanna became a star of the Paris Opera then in 1783, at the age 19, she moved to Sweden.

Her technique was entirely Italian; she was described as noble with beautiful black hair.  At her debut in Stockholm, the applause was said to loud enough “to outdo the thunder”, and caused what was to be referred to as the “Bassi fever” to begin. She danced many roles and gave dancing classes for girls from the upper classes, and occasionally performed as an actor at the French Theatre. All this work made Giovanna a very wealthy woman.

She began an affair with one of the king’s close friends, Adolf, Count Munck. Munck was a notorious womaniser, the king even asked him to give sex lessons so that he could consummate his marriage to Sophia Magdalena of Denmark. Munck himself writes in his written account, which is preserved at the National Archives of Sweden, that in order to succeed, he was obliged to touch them both physically. This “aid” resulted in the birth of the future King Gustav IV  in 1778. The story of baby Gustav’s conception did not however remain private and scandal erupted with rumours circulating that Munck was either the child’s father or the lover of both the king and queen. Accusations from the political opposition were circulating as late as 1786 and in 1789 there were still claims that the King had asked Munck to make the Queen pregnant.

Bassi had a daughter, Johanna Fredrika, by Munck in 1787; she was 25 and he was 38. Bassi’s daughter was said to have a strong resemblance to baby Gustav so Munck might have been his father after all. Munck was forced to leave Sweden 1792 when Gustav III died, he was too tainted with scandal and the rumours about the Regent’s parentage just would not go away. Bassi left the Swedish Ballet and followed him to Rome where she expected him to formally acknowledge their daughter and to marry her. He did neither.

During her stay in Italy, she received large sums of money from the Swedish government to spy on their ambassador Gustaf Mauritz Armfelt in Naples who was courting the support of Catherine the Great for a military intervention to change the Swedish government. With Bassi’s help the plot was discovered. The Swedes sent a man-of-war to Naples to seize him but he escaped with the help of the exiled British Queen Caroline and fled to Russia. At home, he was condemned to death as a traitor and his property confiscated. His mistress, Magdalena Rudenschöld, was judged for complicity and pilloried on the Riddarhus Square before being imprisoned for two years in Stockholm.

Bassi returned to Sweden in 1794 and re-entered the Swedish Ballet, but she was only to remain there for a short while. Munck later made her daughter a beneficiary in his will, but Bassi refused to accept it and denied Munck’s claim on her daughter. She made her break with Munck final in 1794, when she married the German-Swedish merchant Peter Hinrik Schön (1765–1821) following her last performance. In her marriage contract, Bassi stipulated that her spouse should acknowledge her daughter with Munck as his, and that her great fortune should remain her personal and sole property. Schön was bankrupt at the time of the marriage, but was afterwards able to buy Ekholmsnäs Manor at Lidingö; an island in the inner Stockholm archipelago, northeast of Stockholm; where Bassi spent the rest of her life as a business woman, attending to her manor, a brick factory and a snuff factory. She lived with her mother and her friend, the actress Elise Dubelloi from the French Theatre in Sweden and had three sons with Schön.  She died a wealthy and successful woman in 1834, aged 72.