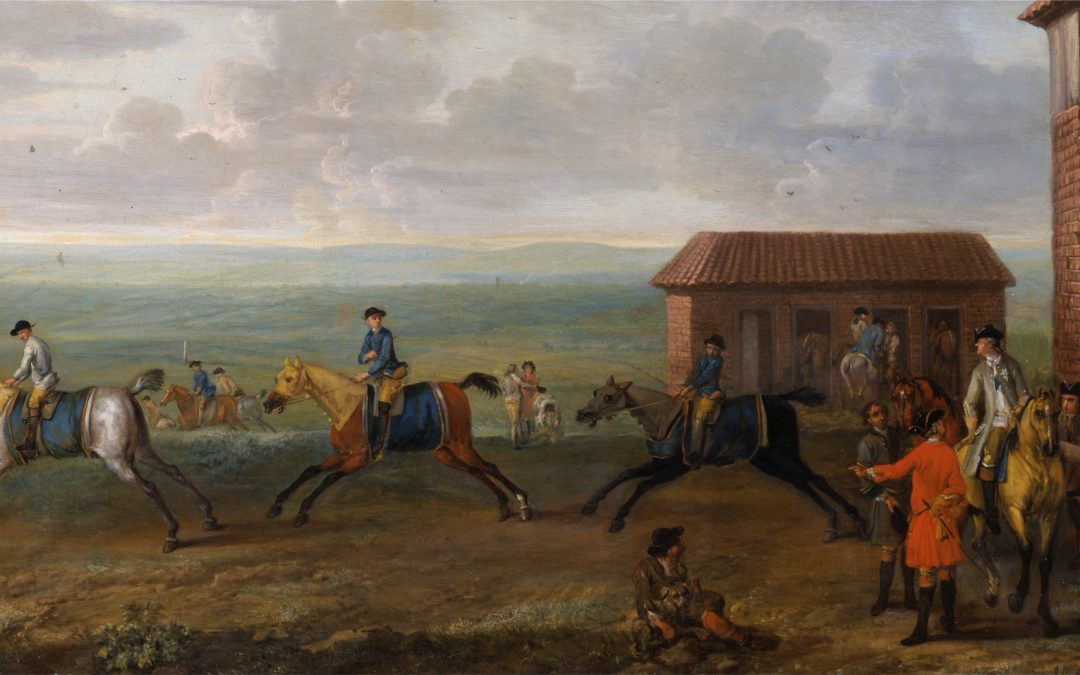 Horse racing is the second largest spectator sport in Great Britain, and one of the longest established, with a history dating back many centuries. It generates over £3.7 billion for the British economy, and the major horse racing events such as Royal Ascot and Cheltenham Festival are important dates in the British and international sporting and social calendar.
In the early 18th century, Queen Anne kept a large string of horses and was instrumental in the founding of Royal Ascot where the opening race each year is still called the Queen Anne Stakes. The first published account of race results was John Cheney’s Historical list of all the Horse Matches run, and all plates and prizes run for in England and Wales which dates to 1727. In a later work, published in York in 1748, the result is recorded of a race run in September 1709 on Clifton and Rawcliffe Ings, near York, for a gold cup of £50.

By 1740 was proving so popular that Parliament introduced an act “to restrain and to prevent the excessive increase in horse racing”; this was largely ignored, and in 1750 the Jockey Club was formed to create and apply the Rules of Racing. The Jockey Club was founded as one of the most exclusive high society social clubs in the United Kingdom, sharing some of the functions of a gentleman’s club such as high-level socialising. It was called ‘The Jockey Club’ based on the late medieval word for ‘horsemen’, pronounced ‘yachey’ and spelt ‘Eachaidhe’ in Gaelic. The club’s first meetings were held at the Star & Garter Pub at Pall Mall, London before later moving to Newmarket; a town known in the United Kingdom as “The Home of Racing”.

Soon racecourses were springing up all over England and many of the classic tracks and races we know today were established such as The St Leger, the Oaks and the Derby were all founded between 1776 and 1780.
The Whitsun meeting was a popular event in the Georgian horse racing calendar. Here is an extract from my novel Sinclair, which is partly set near Beverley in Yorkshire. Beverley was the first racetrack to have a Jockey Club grandstand built to enable spectators to get a better view of the race in 1767 at the cost of £1,000.

” Three days after his father’s funeral, John Leadam and his mother Charlotte was packed into a pony cart by his uncle for the journey to York. They travelled in silence for many dull miles before his uncle spoke. “I’m sorry things turned out as they did, me lad. We had such plans, you know, your father and me. We fancied a day at the point to point.”
“Father would have enjoyed that,” said John.
“As far as I’m concerned, there’s nowt like the thrill of a race. I’ve spent a right few bob on horses in me time as I’m sure your aunt has told you. Lucy loves horses just like me. I’m of a mind to get me hands on one of them thoroughbred mares, but I’ll have to go up north to Bedale or Masham to get one. There’s plenty as wants a good racer or a good hunter in these parts.”
“Would you breed racehorses then, Uncle Robert?”
“Oh, aye, I do already, but they ain’t Arabians. I had great hopes for Blaze. He had a coat as shiny as a conker, but he fell in the first steeplechase I put him in, and I had to shoot the poor bugger. Cost me near fifty guineas. Mariah were furious with me, but when have women known anything about having a bit a fun, eh, John?”
“I heard that, Robert Leadam,” his mother retorted with feigned coolness. “And I’ll ask you not to go corrupting your nephew with ideas about gambling and horses.”
“Now I’m in trouble with your mother,” his uncle chuckled. “I expect you’re more like your dad, John. I bet you’re a sensible boy who works hard at that grammar school you go to in London. It never appealed to me, all that Greek and Latin. What does a farmer need with it? Now, your dad were a different kettle of fish. If the old man hadn’t insisted on educating me there would’ve been enough to send your dad to Oxford, or some such place.”
John looked at his uncle. “I think he would have liked that.” Then he noticed his mother staring out across the frost-covered fields, and said, “But then he wouldn’t have met Mother and everything would have been different.” His mother turned her head and smiled at her son. Robert rattled on, oblivious of the deep emotion that was passing between his passengers, and pushed the piebald ponies on with a swish of his whip.
“Aye, lad, fate’s a funny thing.None of us knows what’s in store for us or how the choices we make will turn out. We just have to make the best of what we’ve got, don’t we?” Charlotte Leadam nodded her head and pressed her hand into her son’s under the blanket, reassuring him of the unbreakable bond between them.”