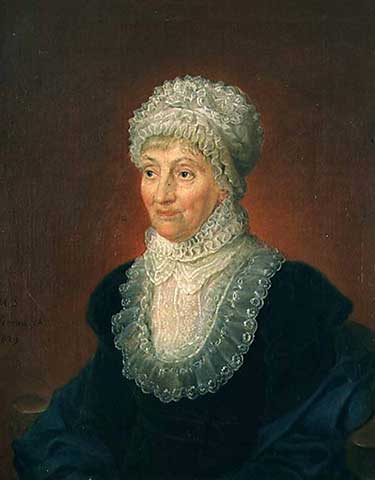 Caroline Lucretia Herschel was born March 16, 1750, in Hanover, Germany. Her father, Isaac Herschel, was a talented army oboist.  At the age of ten, she was struck down with typhus, the effect of this often fatal disease was stunted growth; she never grew taller than four feet three inches, and her eyesight was impaired too. Caroline made an inauspicious start to becoming one of the leading women in the history of women in science.

Her father, did his best to give Caroline and his other children the best education he could without having any proper education himself. He taught his children astronomy, music, and philosophy and Caroline soaked them up. Her mother believed that her daughter would ever marry and decided she should become a household servant discouraging the girl’s education whenever she could. However, after her father passed away in 1767  when Caroline was just 17, she decided to take greater control of her life and took up dressmaking courses and started to train to be a governess. The combination of her demanding mother and the demands of her studies led Caroline to leave Hanover and join her brother, William, who was working as an organist in Bath in 1772.

Caroline the musician and astronomer

For 10 years brother and sister worked together, William playing the organ and Caroline singing. When William decided to abandon his musical career, Caroline followed. In addition to assisting her brother in his observations and in the building of telescopes, Caroline became a brilliant astronomer in her own right, discovering new nebulae and star clusters. She was the first woman to find a comet (she discovered eight in total) and the first to have her work published by the Royal Society. She was also the first woman in Britain to get paid for her scientific work, when William, who had been named the king’s personal astronomer following his discovery of Uranus in 1781, persuaded his patron to reward his assistant with an annual salary.

After William’s death in 1822, Caroline retired to Hanover. There she continued her astronomical work, compiling a catalogue of nebulae. The Herschels’ work had increased the number of known star clusters from 100 to 2,500. Caroline died in 1848 at age 97 after receiving many honours. She was the first woman to be awarded a Gold Medal of the Royal Astronomical Society (1828), and to be named an Honorary Member of the Royal Astronomical Society. The King of Prussia presented her with a Gold Medal for Science on the occasion of her 96th birthday in 1846. In her journal, autobiographical writings and letters to relatives Caroline complained a great deal about her lot, she had spent a great deal of her life caring for her brother and her family. She neither meekly accepted nor publicly challenged the demands they made on her, but she was was delighted by the formal recognition she received later in life.

Sources: Wikipedia, https://www.britannica.com/biography/Caroline-Lucretia-Herschel, Rebekah Higgitt, lecturer in history of science and formerly a curator at the Royal Observatory, Greenwich writing in the Guardian 16/3/2016.