History of Women in Art: The Woman Who Painted Marie-Antoinette 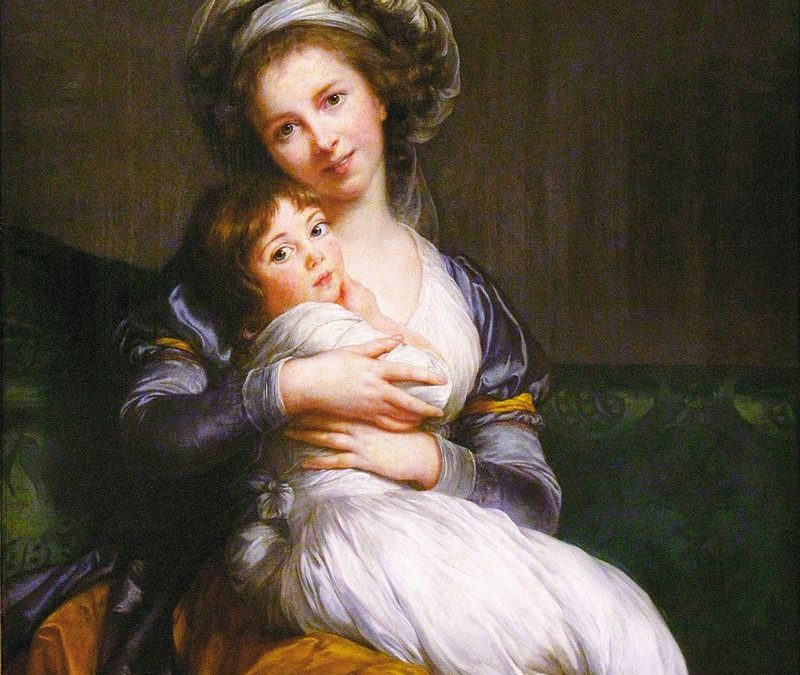 Between 1780 and 1810, many French women painters reached impressive heights of artistic achievement and professional success. They achieved this despite a cap on the number of women admitted to France’s prestigious Académie Royale de Peinture et de Sculpture, and restrictions that barred women from the life drawing classes. At the end of the eighteenth century, women ranked among the most sought-after artists in Europe.

One such was Élisabeth Louise Vigée Le Brun. Le Brun was born in Paris on 16 April 1755, the daughter of a portraitist and fan painter and a hairdresser. Her early childhood was spent in the country where she attended a residential convent school until she was eleven. When she returned home, her father recognised his daughter’s natural skills and ability to paint and gave her access to his studio to develop her skills. Unfortunately, her father died a couple of years later, but luckily her mother married Jacques Le Sèvre, a highly successful jeweller a year later and the family moved to the Rue Saint-Honoré, close to the Palais Royal where Elisabeth continued to paint. By the time she was in her early teens, Elisabeth was painting portraits professionally although ran into trouble with the Paris artists’ guild for practising without a license.

Elisabeth married Jean-Baptiste-Pierre Le Brun, a painter and art dealer in 1776 and the pair began what was to become a very successful business and family life. Four years later Elisabeth gave birth to her first and only child, a daughter, Julie and a year after that she set off to tour Flanders and the Netherlands with her husband to paint members of the Dutch aristocracy. While Elisabeth was there, she was inspired by the paintings he saw in the homes and galleries she visited and decided to adopt some of their techniques. In 1787, she caused a minor public scandal with a self-portrait, that showed her smiling which was at the time considered outrageous as no Greek statue ever showed their teeth!

Her growing fame won her an invitation to the Palace of Versailles and the patronage of Marie Antoinette. Le Brun painted the queen and her children more than thirty times for six years. Le Brun supported the queen’s campaign to present herself as a doting mother, and in return, the queen supported Le Bruns’ application to France’s most prestigious academy, the Académie Royale de Peinture et de Sculpture. She was admitted in 1783 on the same day has another female artist, Adélaïde Labille-Guiard giving the press an opportunity to cast the two women as rivals, pitting Le Brun’s “feminine” style of loose brushstrokes, high-toned colour, and flattering renderings of her sitters against the more “masculine” characteristics of crisp, muted tones, and truth to nature of Labille-Guard’s work. Although many critics applauded the women’s prominence, others lambasted them for immodesty and pamphleteers frequently depicted them naked.

Royal patronage was fine until the outbreak of the revolution in 1789 when association with the royal family was tantamount to a death warrant so Le Brun, who was now separated from her husband, took her daughter and fled to Italy where she lived and worked from 1789 to 1792. From Italy, she moved to Austria where she worked for three years then to  Russia where she painted the portraits of aristocrats until 1801.

After a sustained campaign by her ex-husband and other family members to have her name removed from the list of counter-revolutionary émigrés, Le Brun was finally able to return to France during the reign of Emperor Napoleon I in 1804. In spite of being no longer labelled as émigrée, her relationship with the new regime was never totally harmonious, as might be expected given that she was a staunch royalist and the former portraitist of Marie Antoinette.

Much in demand by the élite of Europe, she visited England at the beginning of the 19th century and painted the portrait of several British notables, including Lord Byron. In 1807 she travelled to Switzerland and was made an honorary member of the Société pour l’Avancement des Beaux-Arts of Geneva.

She published her memoirs in 1835 and 1837, which provide an interesting view of the training of artists at the end of the period dominated by royal academies. Still very active with her painting in her fifties, she purchased a house in Louveciennes, Île-de-France, and lived there until the house was seized by the Prussian Army during the war in 1814. She stayed in Paris until her death on 30 March 1842 when her body was taken back to Louveciennes and buried in the Cimetière de Louveciennes near her old home. Her tombstone epitaph states “Ici, enfin, je repose…” (Here, at last, I rest…).

Illustrations: Self portrait with Julie. Marie-Antoinette with her children.