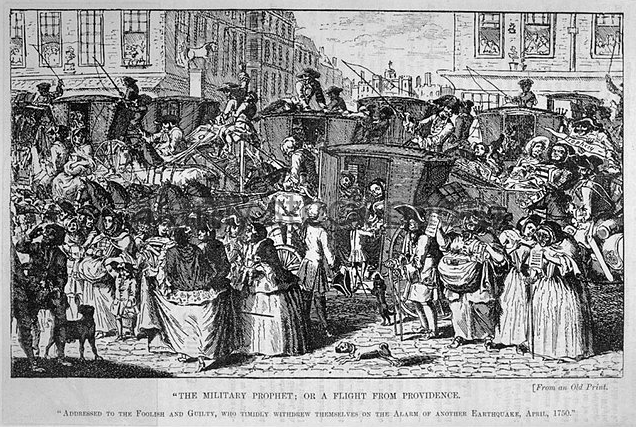 On the 8th of March, 1750, an earthquake shook London. The shock was at half past five in the morning. It awoke people from their sleep and frightened them out of their houses. A servant maid in Charterhouse-square, was thrown from her bed, and had her arm broken; bells in several steeples were struck by the chime hammers; great stones were thrown from the new spire of Westminster Abbey; dogs howled in uncommon tones; and fish jumped half a yard above the water. London had experienced a shock only a month before, namely, on the 8th of February 1750, between 12 and 1 o’clock in the day and at Westminster, the barristers were so alarmed that they imagined the hall was falling!

Most people (including academics) saw the tremors as the work of God. However, The Gentleman’s Magazine, (founded by Edward Cave, alias ‘Sylvanus Urban’, in 1731) which was interested in everything, told its readers that there were three kinds of earthquake; the ‘Inclination’, which was a vibration from side to side, the ‘Pulsation’, up and down, and the ‘Tremor’, “when it shakes and quivers every way like a flame.” Scholars were agreed that the origins of earthquakes were to be found in the underground voids with which the earth was believed to be honeycombed, especially in mountainous regions; but whether it was the surges of air, water or fire within these caverns that were the actual cause of the shock was still disputed.

Despite only the minor damage, Londoners were worried. One earthquake was remarkable, but two earthquakes in a month was unprecedented. Were they a warning from God? Thomas Sherlock, the Bishop of London, was sure of it. In a letter to the clergy and inhabitants of London, he called on them to “give attention to all the warnings which God in his mercy affords to a sinful people…by two great shocks of an Earthquake”. He pointed out that the shocks were confined to London and its environs, and were therefore ‘immediately directed’ at that city.

On Sunday, March 18, at about 6 pm, Portsmouth and the Isle of Wight were shaken, and, as they trembled, the air vibrated to a noise like the firing of great guns. The shock was even felt, though faintly, at Bath. On Monday, April 2, at about 10 pm, Liverpool and an area about 40 miles round vibrated to ‘a smart shock of an earthquake’ for two or three seconds.
1750 was a year when the earth trembled up and down the land. The weather was also considered freakish. People lived in trepidation waiting for the next catastrophe.

The last, and strongest, English earthquake of 1750 shook Northamptonshire and several other counties, just after noon on September 30. It was ‘much stronger than that felt in London”, and lasted nearly a minute. Part of an old wall in Northampton was thrown down, a lady in Kelmarsh was tossed from her chair, and all over the shaken district people ran into the street. At Leicester, a rushing noise was heard, and the houses heaved up and down. The convulsion caused terror, but passed off with only the loss of some slates, chimney parts, and a few items of glassware. Near Leicester, an unfortunate child was shaken out of a chair into a fire, and was ‘somewhat burnt’.