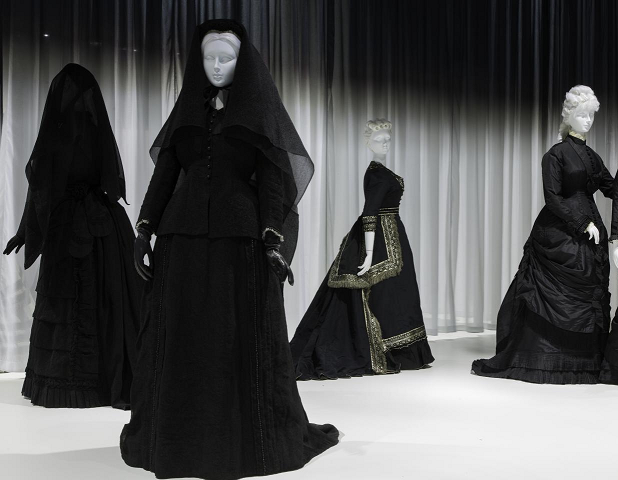 By the late 19th century, mourning behaviour in England had developed into a complex set of rules, particularly among the upper classes. For women, the customs involved wearing heavy, concealing, black clothing, and the use of heavy veils of black crêpe. The entire ensemble was colloquially known as “widow’s weeds” (from the Old English waed, meaning “garment”). The growing wealth of the eighteenth century aristocracy set the trend for the flamboyant expression of loss and grief with masses of black bombazine silk, ostrich feathers and bows but older and poorer women choose a much simpler, more practical styles and with the growth of the urban middle class, particularly in Britain the demand for dull, black, mourning wools, and black and white silk crepe increased as incomes and social expectations rose.

The wearing of mourning clothes was more of a social necessity for women than men. Whilst men might wear a special suit of sombre clothing for the actual funeral they were rarely expected to wear special clothes or colours unlike women who were expected to show the world their change in status for at least a year and a day. Of course many women wanted show respect to their dead husbands and continued to wear sombre colours for the rest of their lives. Indeed Charlotte Leadam the feisty heroine of my new  novel Sinclair is a young widow who faces this very problem.  As she waits for her husband’s creditors to present their accounts, we find her, “wearing her new mourning clothes; a respectable but uncomplicated widow’s cap and a full length black cloak both in black bombazine silk.

In a world where a woman became her husband’s property on marriage and where a middle class widow could not enter the professions to support herself signalling this change in marital status could have its advantages showing men that they were available for marriage again.

Julia Herdman is a novelist writing about 18th and early 19th century London. Her debut novel Sinclair is about a family of apothecary surgeons working at Guy’s and St Thomas’s Hospitals at the dawn of modern medicine.