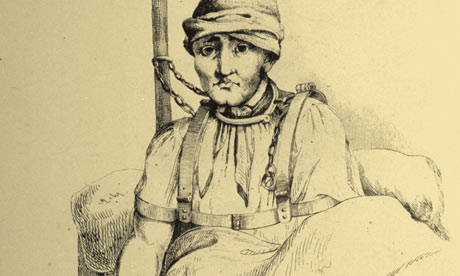 ‘Bedlam’, London’s first public mental hospital, is typically understood as a byword for chaos, mania and disorder. The world’s first hospital for the sick of mind is more properly known as St Mary Bethlehem, or Bethlehem Hospital and it was founded in 1247 as the Priory of the New Order of St Mary of Bethlem in the city of London during the reign of Henry III.
From 1600 the hospital allowed visitors and artists to observe the ‘mad’.In William Hogarth’s series, A Rake’s Progress (1733-34), The Rake meets his end there shown among a menagerie of strange, otherworldly characters: a magician, emperor, musician and an astrologer while two fashionably dressed women enjoy the spectacle. Hogarth’s etching stresses how a visit to ‘Bedlam’ was understood predominantly as a tourist activity for the wealthy and leisured classes.
By 1750, the acquisitive Monroe family of ‘mad doctors’ was in charge and as the paying visitors viewed the restraints and purges, it became an issue of n public debate. Bethlem had lost its institutional monopoly for the treatment of insanity by the creation of St Luke’s Hospital for Lunatics in 1751 and the debate on how to treat the ‘mad’ entered a new stage.
The hospital was run by men but had many female patients. The warders were men too and abuse was frequent. As the 18th century progressed criticism of the hospital increased and it closed it doors to the public in 1770.
One of Bedlam’s most infamous treatments was called rotational therapy. A patient would be seated in a chair or swing, suspended from the ceiling, and spun by an orderly at a speed and duration prescribed by a doctor. This could mean a hundred rotations per minute, and could last an hour. Developed by Erasmus Darwin (grandfather to Charles), he believed that mental illness could be cured with sleep, and rotational therapy would expedite sleep. Of course, it didn’t; it usually only expedited vomiting – which was encouraged. Purging treatments were believed to be curative.
A Parliamentary inquiry in 1815/16 recorded: “gross negligence in the care and management of patients, and heedlessness of the conditions in which they were housed; decided medical apathy toward therapeutic innovation; excessive restraint employed by design and default, and as a means of coping with under-staffing; and inadequate medical supervision of dishonest, and often brutal, ancillary staff..”
The situation at Bedlam finally began to change around 1852, when William Hood was hired as the first-ever resident physician. He believed that tranquillity was the best way to cure mental illness. Hood didn’t believe in chaining up the patients. Instead, he allowed the patients access to magazines, games, and crafts. In 1863, the Broadmoor Hospital for the Criminally Insane opened, and Bedlam’s violent, aggressive patients were moved there, creating a calmer atmosphere.
Sources: History Today, Anna Jamieson, Wikipedia, Jonathan Andrews, Andrew Scull, Undertaker of the Mind John Monro and Mad-Doctoring in Eighteenth-Century England , Ayse Wax at BlumHouse.com
Illustrations; William Hogarth, The Rake’s Progress, Plate VIII, A woman restrained, Bedlam Hospital at Moorfields, The Bedlam Swing.

Julia Herdman is a novelist writing about 18th and early 19th century London. Her debut novel Sinclair is about a family of apothecary surgeons working at Guy’s and St Thomas’s Hospitals at the dawn of modern medicine.