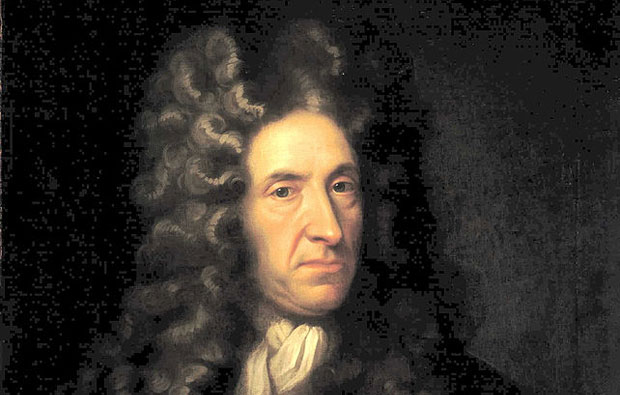 Defoe is known today for his contribution to English literature with works such as Robinson Crusoe, Moll Flanders and Roxanne but there was far more to him than a mere penner of novels.

Defoe was a talented and versatile writer who used his writing skills to influence not only the world of fiction but the history of Britain too. His portrait gives us some clues to the man’s character. He was clearly a handsome man, perhaps even charming. We can see in his long lean face a man a man who was ambitious, shrewd, and intelligent but underneath his respectable persona history tells us that he was not always honest. In his writing, he was prolific, controversial, entertaining and, under duress politically adroit using his skills of persuasion save not only his own life and but change the course of British history.

Born in 1660 Defoe lived through some of the most tumultuous events in British history: The Great Plague of London 1665 and The Great Fire that followed it a year later when his father’s shop was one of two houses left standing in their neighbourhood. His father, James Foe, was a prosperous tallow chandler and a member of the Worshipful Company of Butchers. His mother died young and the young Foe was sent to be educated first in Surrey then at 14 he attended a school in Newington Green, London. His education was Presbyterian and as a dissenter, he and his family were always in danger of government persecution.

After school, Defoe entered the world of business as a general merchant, dealing at different times in hosiery, general woollen goods, and wine. His ambitions were great and he was able to buy a country estate and a ship as well as civets to make perfume, though he was rarely out of debt. In 1684, he married Mary Tuffley, the daughter of a London merchant, receiving a dowry of £3,700 – a huge amount by the standards of the day.

In 1685, he abandoned his new wife and joined the ill-fated Monmouth Rebellion supporting James Scot the Duke of Monmouth and the illegitimate son of Charles II in his attempt to usurp his uncle, the Catholic king, James II. He was lucky and somehow; probably by turning King’s evidence; gained a pardon when the rebellion was quashed escaping the Bloody Assizes of Judge Jeffreys.

However, he was not so lucky in business. In 1692, Defoe was arrested for debts of £700 though his total debts may have amounted to £17,000. Again with a bit of luck and persuasion, he got out of prison and disappeared to Europe and Scotland, trading in wine. By 1695, he was back in England, now formally using the name “Defoe” and serving as a “commissioner of the glass duty” responsible for collecting taxes on bottles. In 1696, he ran a tile and brick factory in what is now Tilbury in Essex and lived in the parish of Chadwell St Mary.

Defoe’s first notable publication was An Essay upon Projects, a series of proposals for social and economic improvement, published in 1697. From 1697 to 1698, he defended the protestant, Dutch-born King William III with his writing particularly with the publication of his poem, The True-Born Englishman in1701, in which he ridiculed English xenophobia.

However, William’s death a year later and the ascent of conformist Anne made Defoe a natural target for the English authorities. However, that did not stop Defoe. In December 1702 he published a pamphlet entitled, The Shortest-Way with the Dissenters; Or, Proposals for the Establishment of the Church, purporting to argue for the extermination of anyone not adhering to the faith of the Church of England. The pamphlet was satirical but unfortunately, like many satires, it was not widely understood. Defoe was charged and found guilty of seditious libel at the Old Bailey where the notoriously sadistic judge, Salathiel Lovell, sentenced him to 3 days in the pillory and a fine of 200 marks.

The price of his release was high. In prison he wrote to William Paterson, the London Scot who founded the Bank of England and part instigator of the infamous Darien scheme that bankrupted Scotland, asking for a loan. Paterson spotted an opportunity and in turn approached the Speaker of the Commons and Queen Anne’s confidant, Robert Harley, 1st Earl of Oxford. Harley was not only Speaker of the Commons but Queen Anne’s spymaster and political fixer. Harley was persuaded to employ Defoe to influence the Scots to accept the Act of Union. With little prospect of ever raising the 200 marks and facing a lifetime in gaol Defoe agreed and started his new life as a spy and political journalist.

Defoe immediately published a magazine called, The Review, which appeared weekly, then three times a week, written mostly by himself. The Review was the main mouthpiece of the English Government promoting the Act of Union 1707.

Defoe began his Review campaign persuading the English that the Union was a good idea saying that it would remove the hostile threat from the north and provide an “inexhaustible treasury of men”, and a valuable new market increasing the power of England. With the campaign in England underway, Harley ordered Defoe to Edinburgh in 1706 charging him to work undercover and to do everything possible to secure Scottish acquiescence to the Treaty of Union.

Defoe’s first reports to Harvey included vivid descriptions of violent demonstrations against the Union. “A Scots rabble is the worst of its kind”, he reported. Years later John Clerk of Penicuik, a leading Unionist, wrote in his memoirs that, “He [Defoe] was a spy among us, but not known as such, otherwise the Mob of Edinburgh would pull him to pieces.”

Defoe used his Presbyterian family history to gain the trust of the adviser to the General Assembly of the Church of Scotland and committees of the Parliament of Scotland. He told Harley that he was “privy to all their folly” but “perfectly unsuspected as with corresponding with anybody in England”. He used this deceit to influence the proposals that were put to Parliament in Harley’s favour.

He used all his persuasive skills to help the English Government hoodwink the Scottish Parliament into believing that they would have full sovereignty over their realm; he wrote articles supporting the Union passing himself off as Scottish. He even wrote pamphlets in Scots to make them look authentic. With his master’s work done and the Act of Union railroaded through the Scottish Parliament Defoe sealed the deceit with a massive history of the Union in 1709. With his liberty restored but considerably out of pocket he used of his Scottish experience to write his Tour thro’ the whole Island of Great Britain, published in 1726, where he admitted that the increase of trade and population in Scotland which he had predicted as a consequence of the Union was “not the case, but rather the contrary”.